Story courtesy of the NOAA Office of Education

In early March of 2020, communities around the country were preparing to respond to the COVID-19 pandemic. Schools and businesses faced closures, and people everywhere were dealing with unprecedented uncertainties. So when Nicole Bartlett with NOAA’s Regional Collaboration network reached out to Grace Simpkins, an educator with Woods Hole Sea Grant, to ask about offering a webinar for students during the stay-at-home orders, Grace initially wanted to keep things simple. “Maybe [we can offer] one webinar,” she thought. “Okay, maybe three...”

Twelve weeks and 35 webinars later, the NOAA Live! 4 Kids series had reached 4,900 live participants, providing opportunities for kids across the country and around the world to interact with scientists and learn about careers at NOAA.

Both mothers of two, Grace and Nicole were aware of the complexities that students, families, and educators were facing as the novel coronavirus began to spread in the United States. “There was a gap from when schools closed to when schools started remote learning,” says Nicole. “Parents were searching for ways to bring some normalcy in their lives and also looking for safe, online content where they knew their children were learning and having fun.”

So on March 16, the two collaborators offered the first of what they thought would be just three webinars, primarily geared toward students in Massachusetts. Grace kicked off the series with an introduction to marine mammals that drew almost 200 participants. The second webinar about aerial surveys of whales pulled in twice as many attendees. By the end of that first week, it was clear to Grace and Nicole that the webinars were providing something valuable to families during a challenging time. 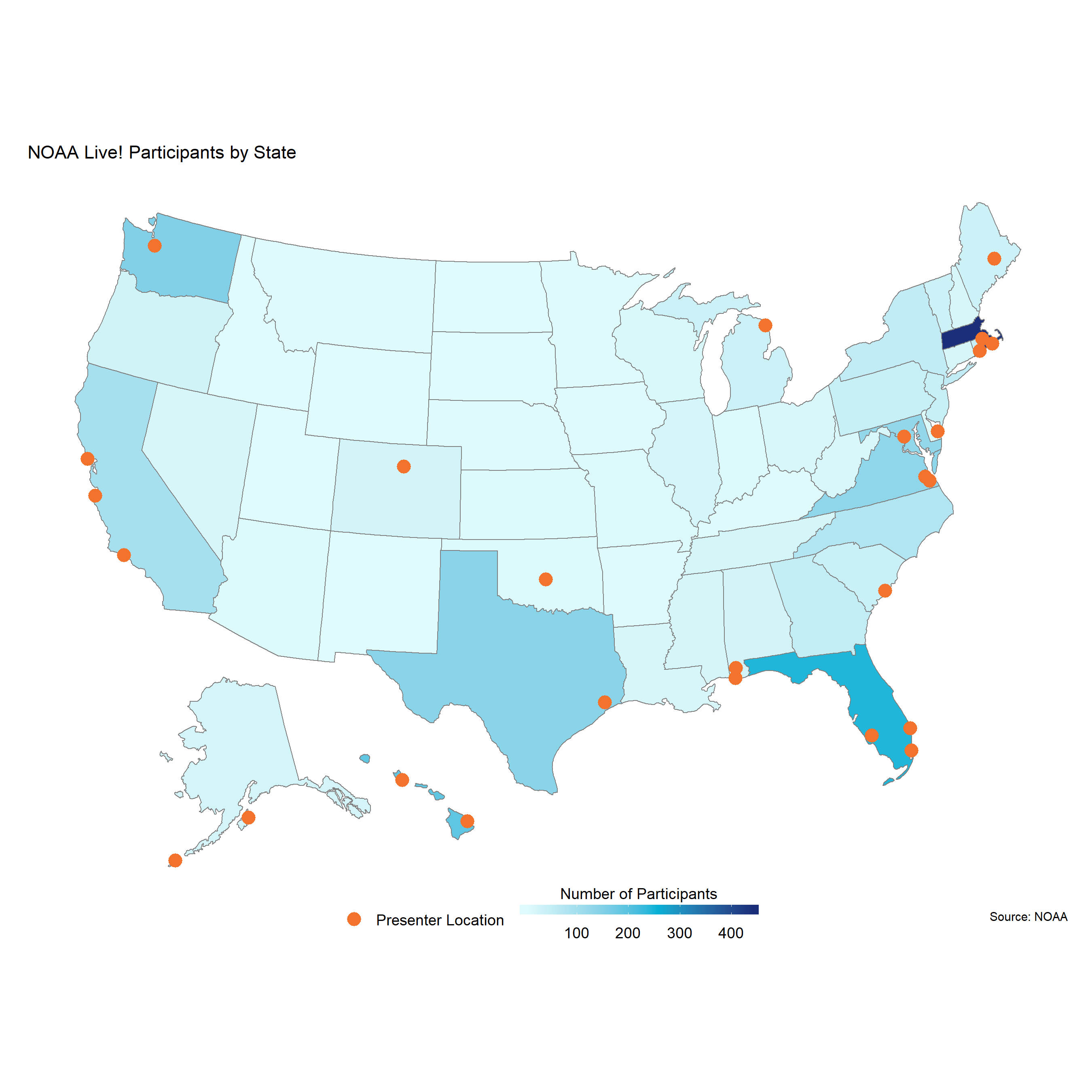 A map of the United States shows webinar participation from around the country. Orange dots show where the webinar presenters were located, and the different shades of blue show the number of participants from each state throughout the webinar series for which location information was collected. (NOAA)

Going well beyond their initial plans, NOAA Live! 4 Kids continued every Monday, Wednesday, and Friday through June 12. Each webinar featured a different NOAA expert or topic and a moderated, live Q&A for participants. Students learned about careers at NOAA through two-way interactions with experts, including a NOAA Hurricane Hunter, a deep sea explorer, a fisheries biologist, a weather forecaster, and more. Presenters engaged directly with the students, posing questions and polling students to test their understanding of a topic. Students were encouraged to ask questions throughout the presentation to learn about whatever piqued their curiosity.

As the series evolved, the audience grew and expanded. When schools started to schedule remote learning for students, YouTube views of the webinar recordings soared. To date, the recorded webinars have received just shy of 18,000 views. Grace and Nicole lined up presenters from across all of NOAA’s mission areas throughout 17 different states. They hosted themed weeks such as “Alaska Week” and “NOAA Live! In the Pacific Islands” so the webinars could reach audiences around the country. Other webinars supported national campaigns, including NOAA’s Hurricane Awareness Week.

As an educator, Grace knew that talking to students wasn’t exactly child’s play. To prepare presenters for these live interactions, she and Nicole provided up to three hours of virtual training and practice sessions. Presenters reported that the training they received — presenting to a virtual audience, engaging younger students, and framing their stories — would help them throughout their careers. After all, as Grace explains, “If you can make your science interesting and understandable to a third grader, you can share it with anyone.”

After each webinar, comments rolled in from viewers. Participants joined from all 50 states, the District of Columbia, Puerto Rico, the U.S. Virgin Islands, and 24 additional countries. Several teachers assigned the webinars as assignments during the week, reached out to ask where they could get the props used during the webinars, or asked for additional resources to use alongside them with their students.

Something that Grace and Nicole didn’t expect was that the parents seemed to enjoy the webinars as much as kids! One parent commented, “My daughter ... loved listening and participating. I listened, too, and found the presentation to be both age-appropriate and very informative.”

After the Hurricane Hunter webinar, NOAA Live! 4 Kids started to draw more participation from Spanish-speaking countries. Nicole and Grace added Spanish subtitles to all recorded webinars to accommodate this growing demand. They also began to get messages in Spanish (“Me encanto!” wrote in Luis, age 11).

In the fourth week, Grace and Nicole added a tribal land acknowledgement for each presenter and moderator to show respect for native peoples across the country.  A parent from Illinois wrote that “the indigenous statements at the beginning had us talking about history, colonial expansion, westward expansion, and native policies. We’ll be exploring more of that this summer.”

A small group of students hailing from across the country were regulars. Grace and Nicole got to know them by name and noticed when they were absent. These repeat participants, along with the comments and interactions in the webinar chat box, built a sense of community around the series. To commemorate the shared experience, students can receive an iron-on patchoff developed for the webinar.

Although the current series wrapped up for the summer, NOAA Live! 4 Kids continued this summer as part of the Seattle-based NOAA Summer Science Camp and plans are in the works in the Alaska region to continue in the coming school year. The series not only provided an opportunity for students to engage with scientists from the safety of their own homes, but also showed how passionate people can contribute to a crisis in unexpected ways. “I’m not a doctor or a nurse; I can’t treat patients,” says Grace. “But this was our way to do something really meaningful. It allowed us to fill a need — not just for kids, but for ourselves. A need to help out in some way.” 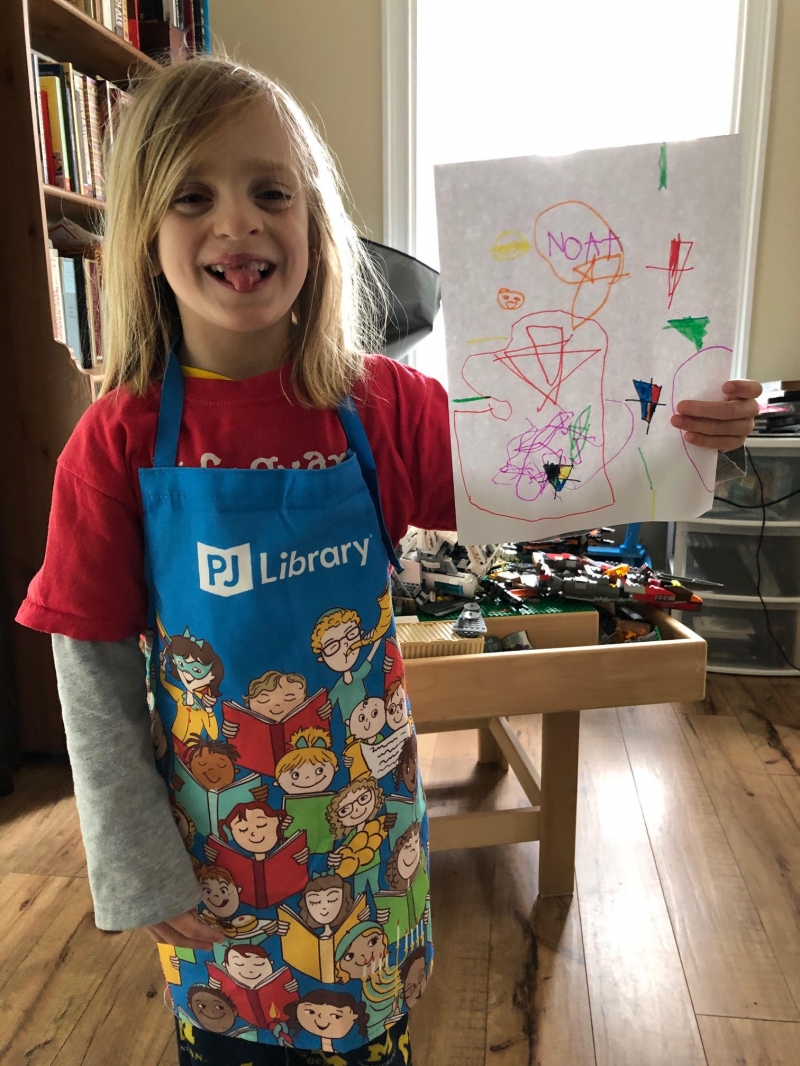