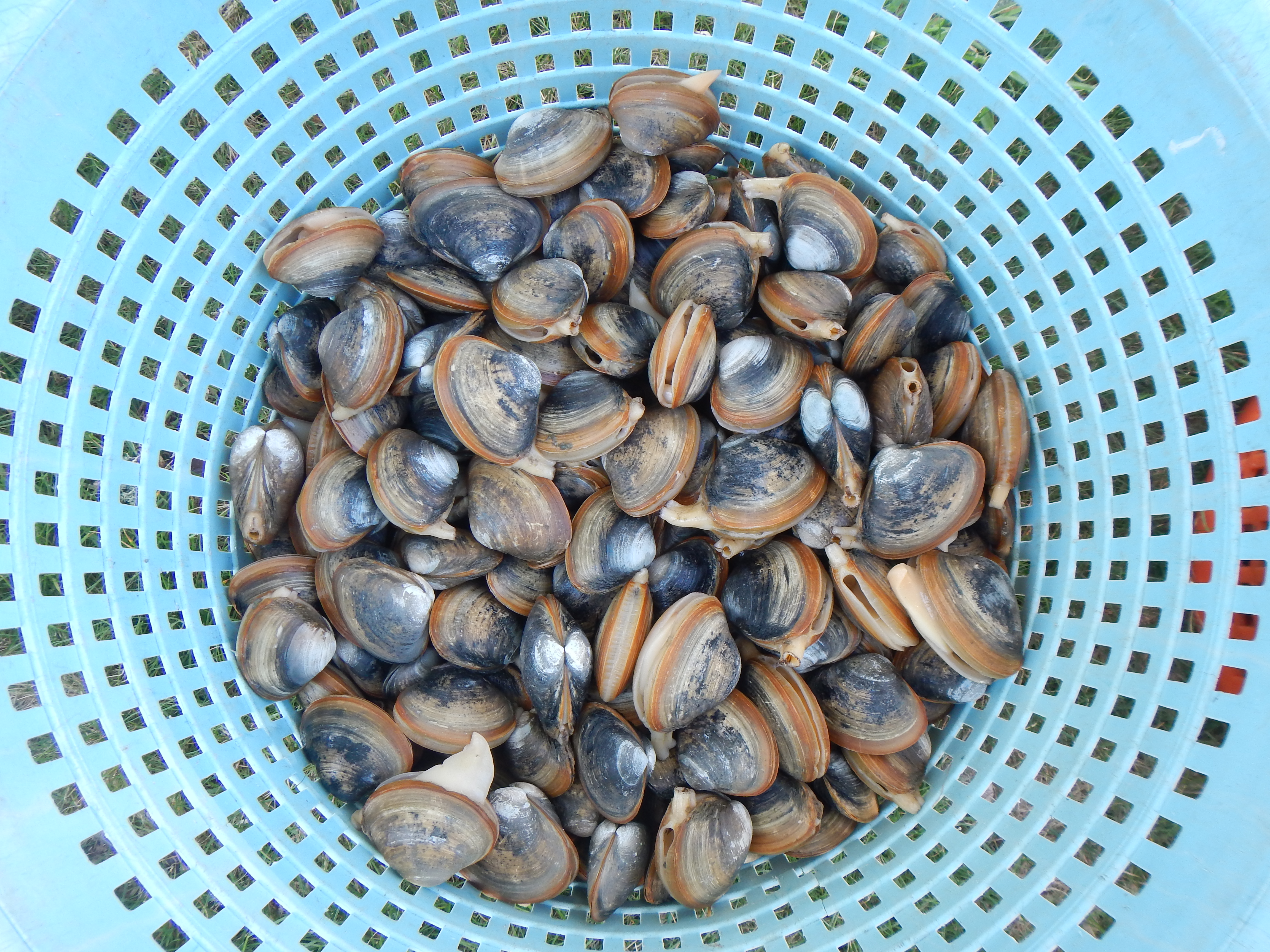 Atlantic surf clams, Spisula solidissima, are a type of clam common to the Atlantic coast from the Gulf of St. Lawrence to Cape Hatteras, NC. A subspecies also exists, the Southern surf clam, Spisula solidissima similis that ranges from the Gulf of Mexico to Massachusetts. These clams are harvested in the wild with boats and are often made into clam strips or minced clams. People involved in shellfish aquaculture have also been experimenting with growing surf clams on nearshore aquaculture leases.  When grown to 1.5-2 inches long the clams are referred to as ‘petite surf clams’ or ‘butter clams’.

From 2016-2019, Woods Hole Sea Grant worked with partners at the ARC Hatchery, the Cape Cod Commercial Fishermen’s Alliance, and several growers in Wellfleet and Barnstable to test out different growing methods for petite surf clams.  The results of those experiments can be found in the recently published Marine Extension Bulletin.  One of the findings of that work was that high temperatures in the summer caused many of the clams to die.

Based on those results, WHSG staff wondered if the Southern surf clam might grow better in Cape Cod waters, especially during the summer since it is exposed to higher temperatures in the southern part of its range.

Permission from the Division of Marine Fisheries was requested and they approved because the southern surf clam is naturally present in Cape Cod waters. Hatcheries raised both the Atlantic and the Southern surf clams, and WHSG sought out shellfish growers to work collaboratively on an experiment to compare mortality and growth rates of the two types of surf clam.

The photos below show the WHSG staff planting the clams with the help of shellfish farmers in Provincetown, Eastham, and Barnstable Harbor.  Four more sites are located in Wellfleet, Falmouth, Bourne and Chatham.

Hover on each photo for a caption and follow the narrative of what goes into an important project like this that is assisting our stakeholders and, eventually, consumers! 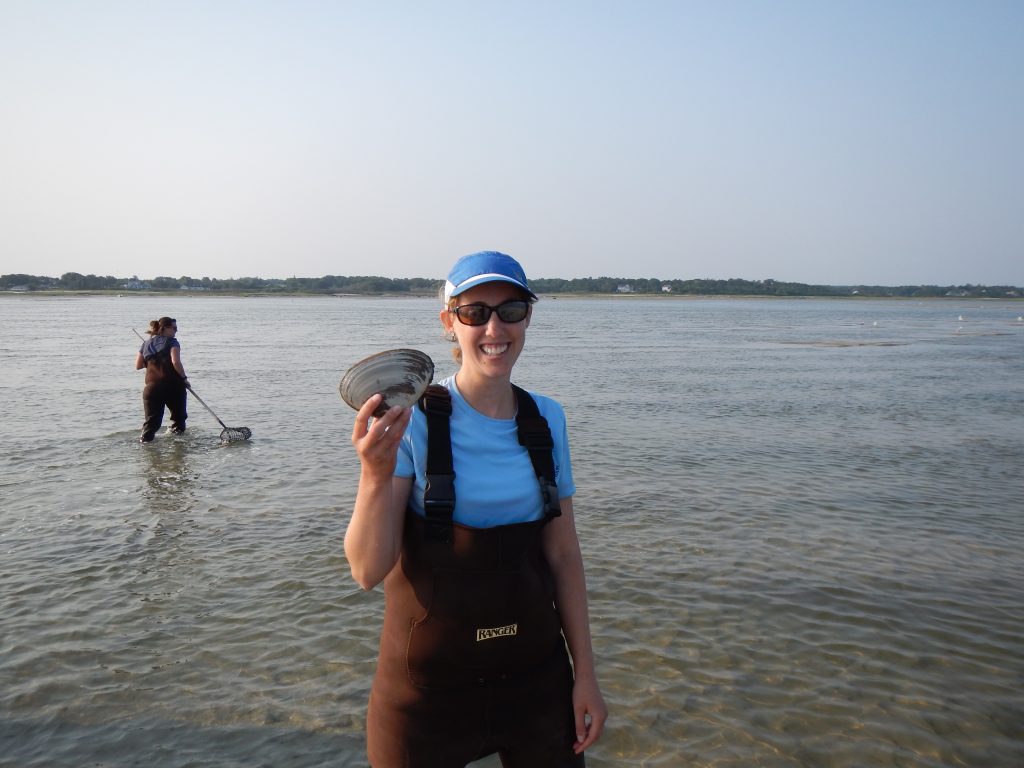 1. Surf Clams can grow to be 8 inches long. To harvest them in the wild they must be at least 5 inches long. This one is being held by WHSG Fisheries & Aquaculture Specialist Abigail Archer. 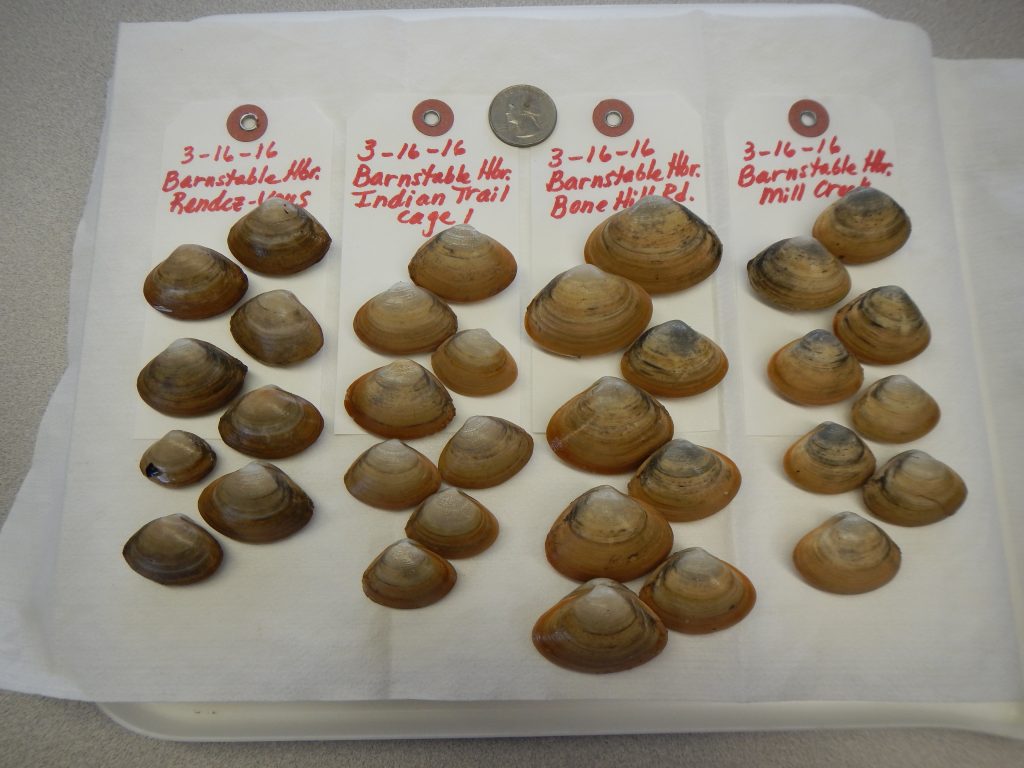 2. When surf clam seed is obtained from a hatchery and planted on an aquaculture lease (also known as a grant) they can legally be harvested at 1.5 inches long. 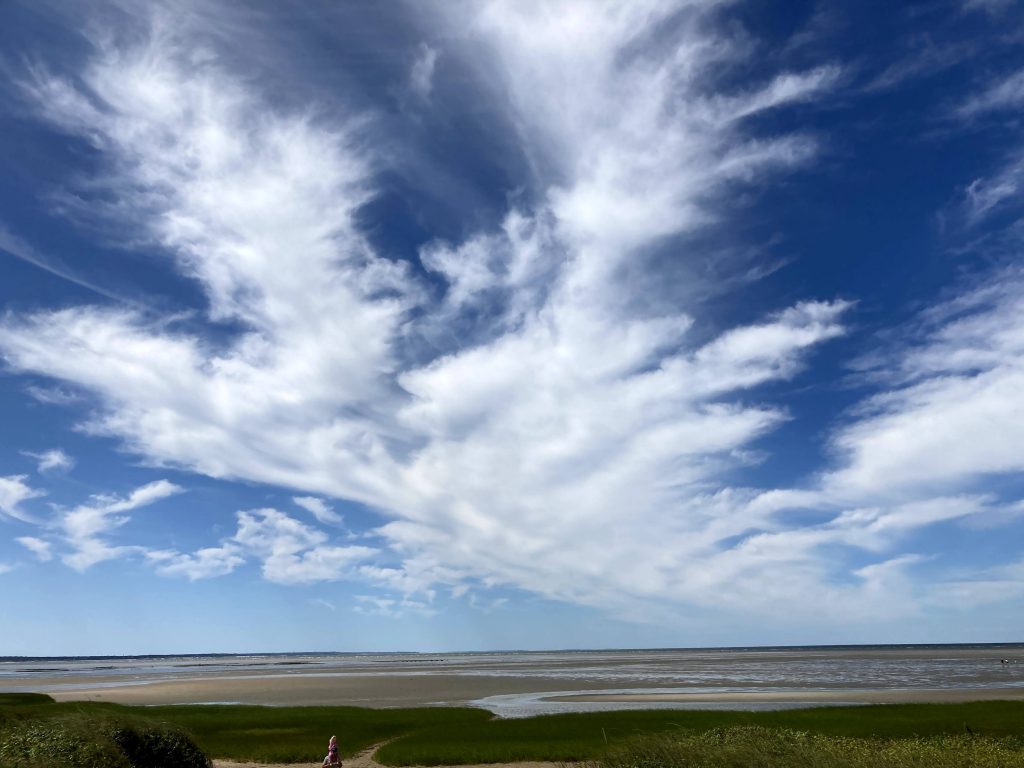 3. Walking out to the shellfish aquaculture grants in Cape Cod Bay in Eastham 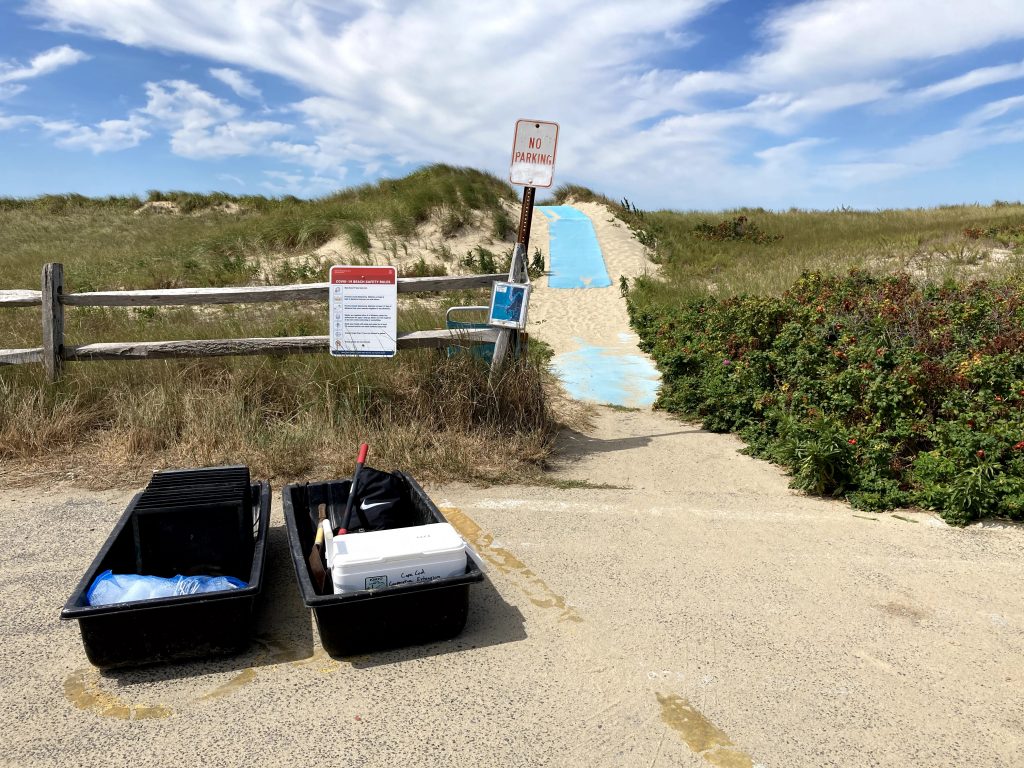 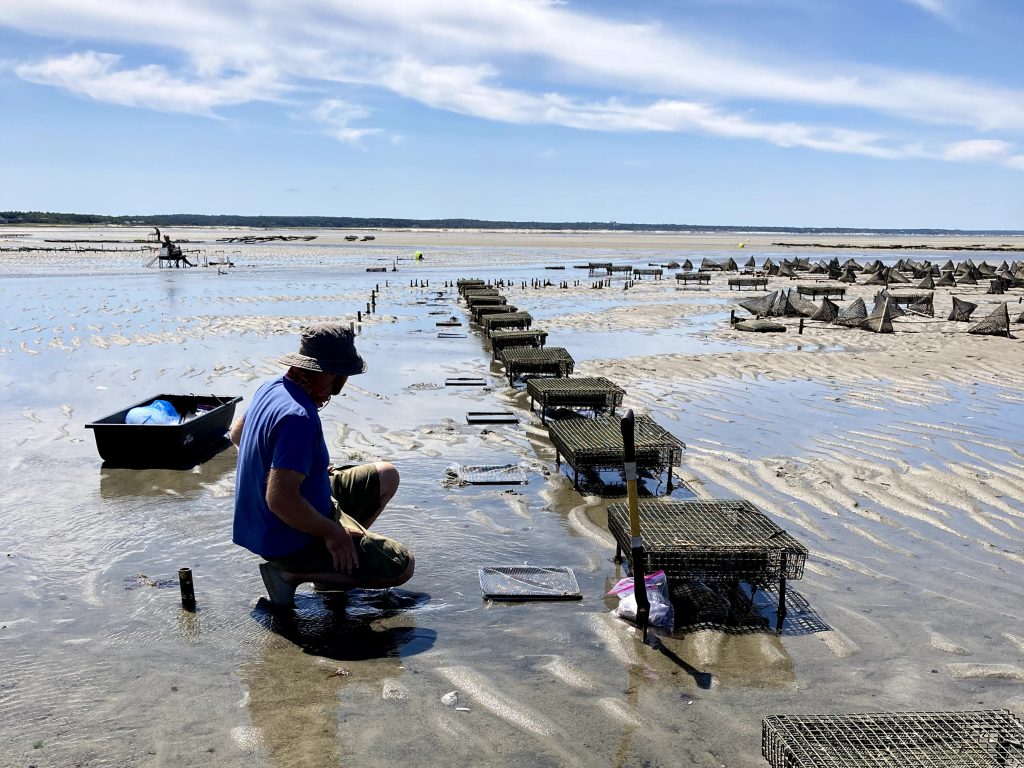 5. The surf clam seed is planted in the sediment in the square boxes closest to the ground. Some boxes contain the Atlantic surf clams and some the Southern surf clams. The other gear is for growing oysters. 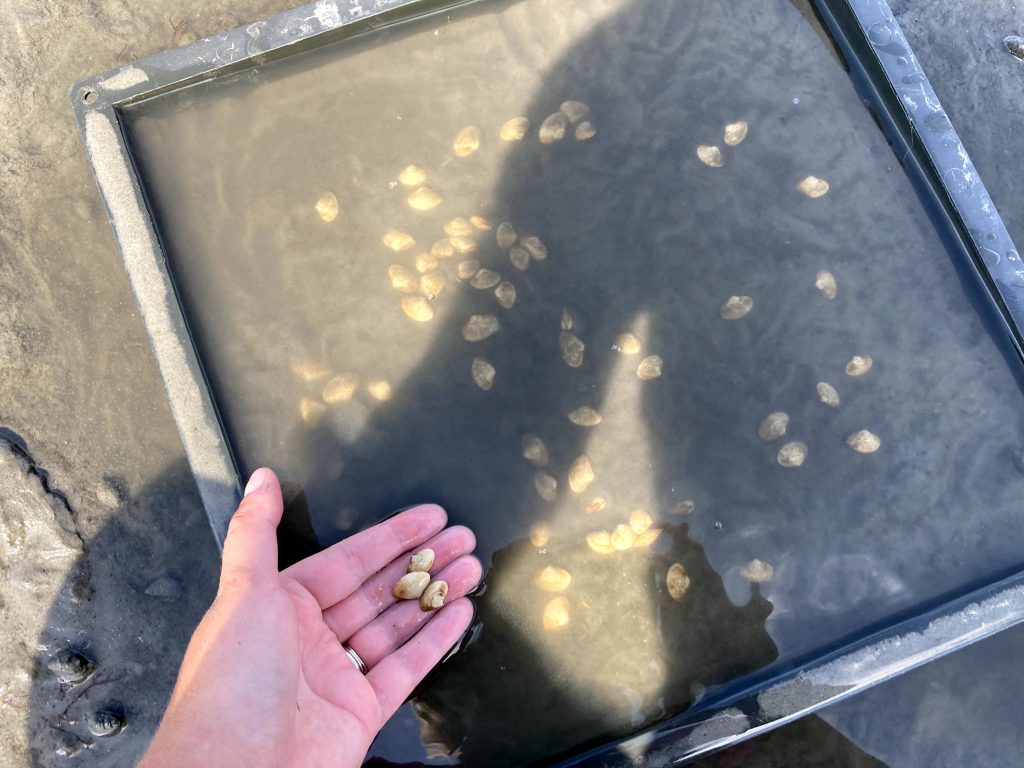 6. The surf clams are less than one inch. 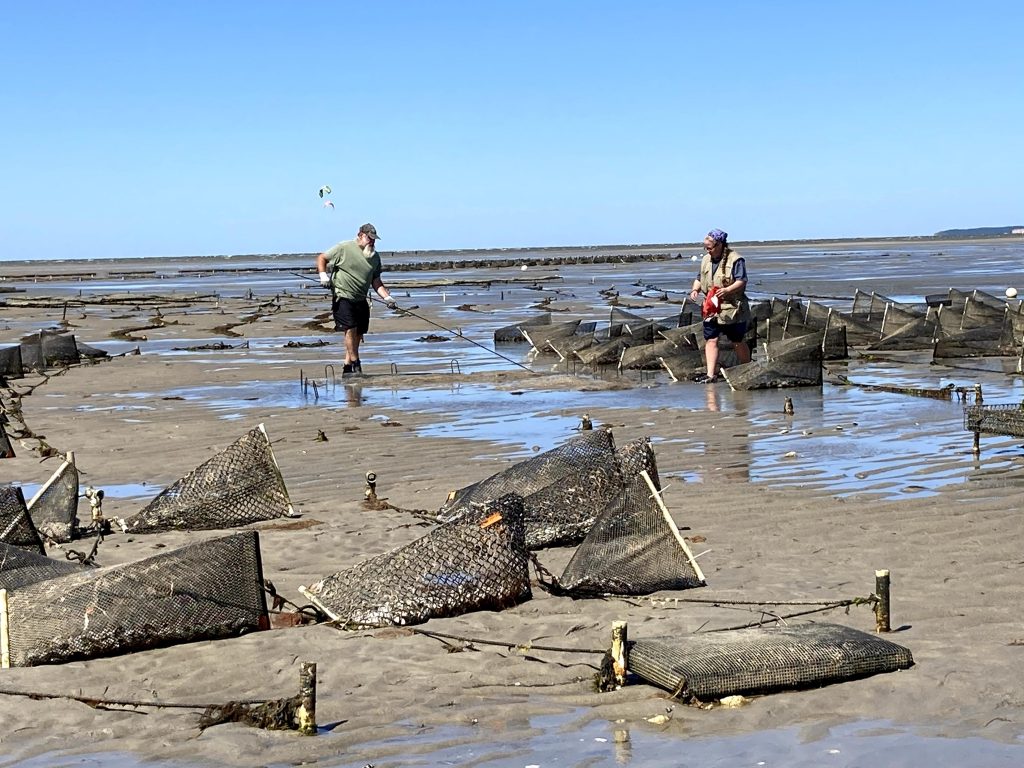 7. Shellfish farmers Kirsten Friedrich and Craig Poosikian are also planting surf clams under nets, similar to how quahogs are grown. 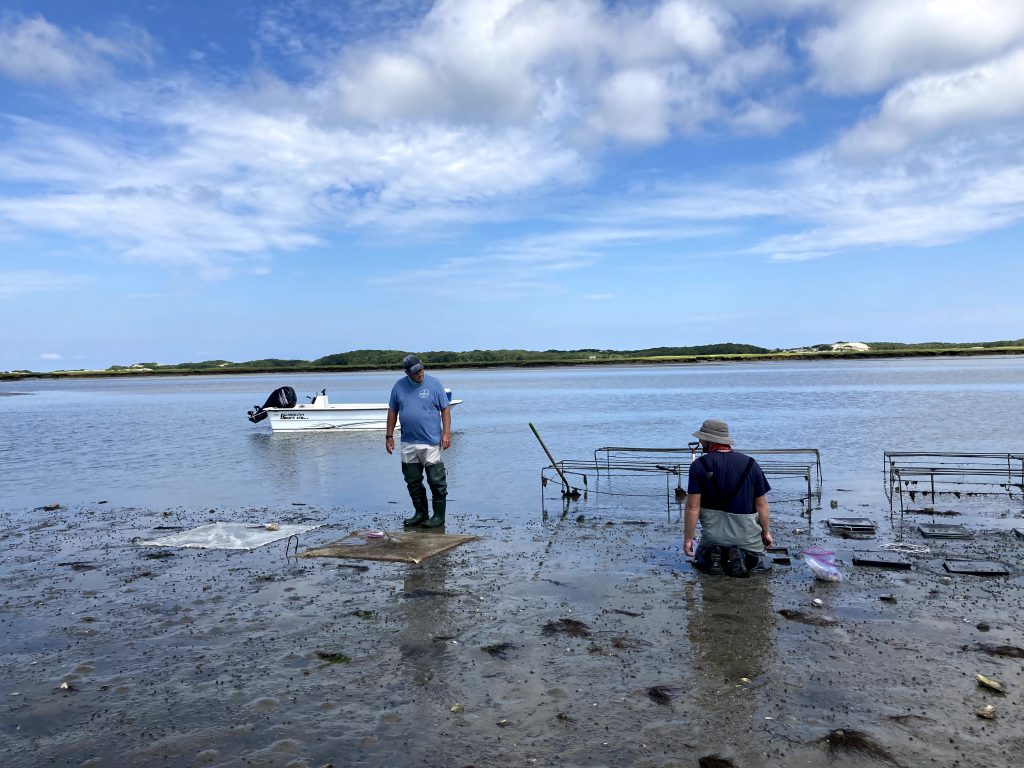 8. Next stop – Barnstable Harbor. The surf clams will also be grown in boxes and under nets at this site. 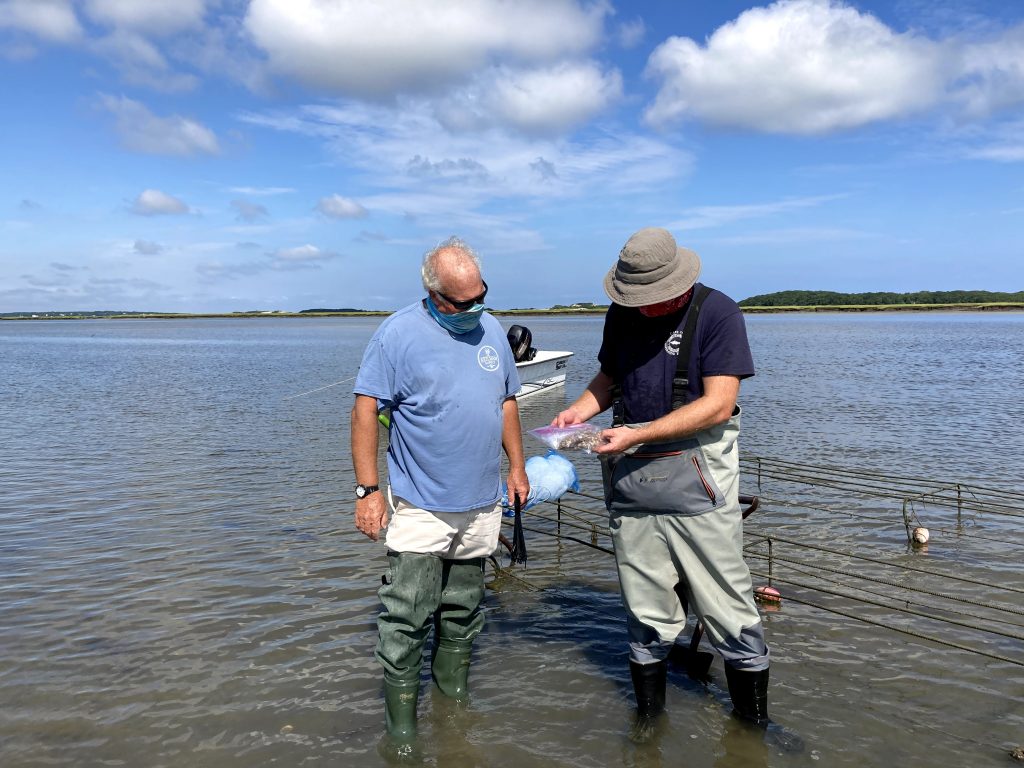 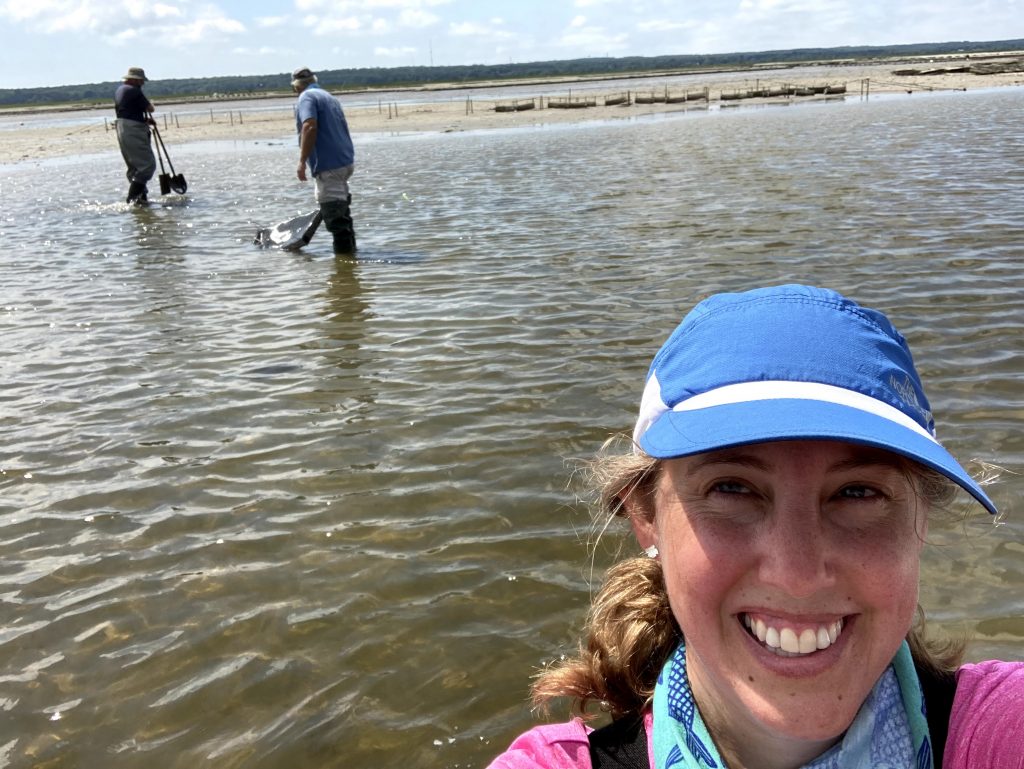 10. Carrying out the same experiment in multiple locations helps determine if growth rates and survival are totally site specific or if the surf clams grow and survive in similar ways regardless of location. 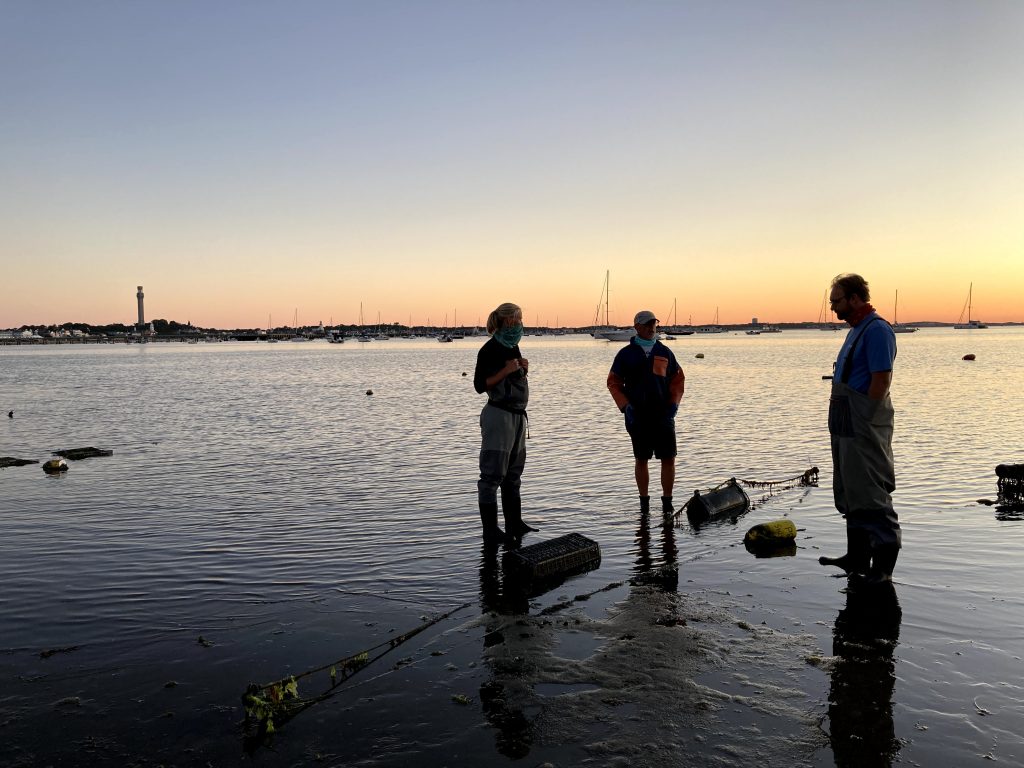 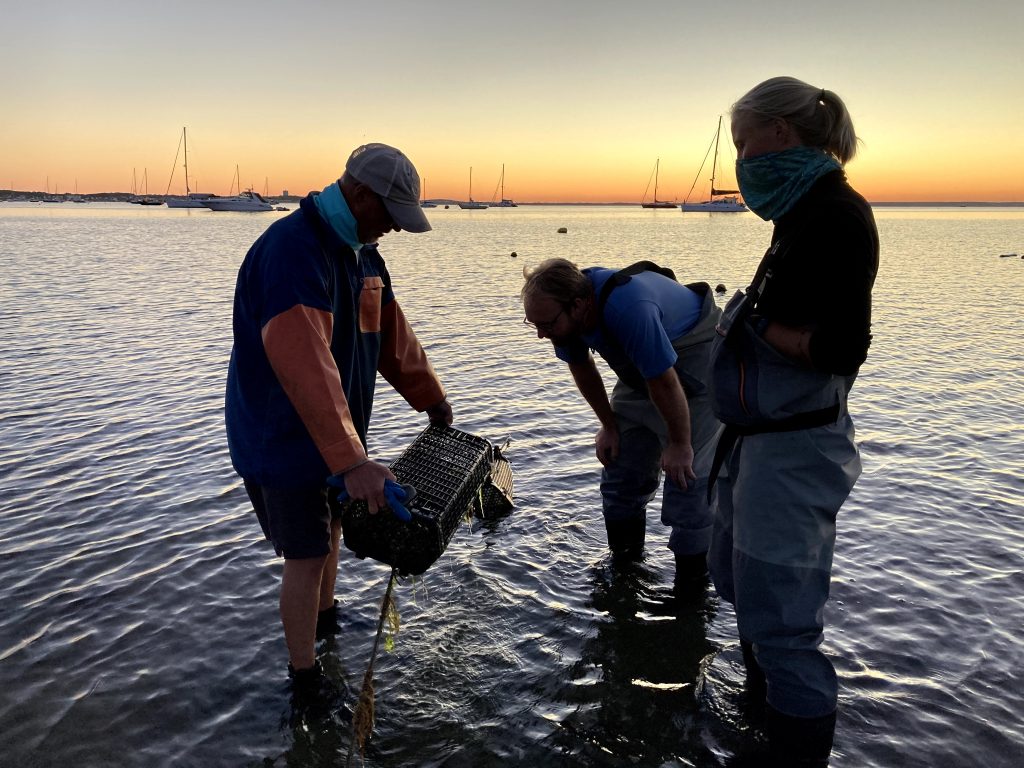 12. Alex Brown shows Josh and Harriet the surf clam seed he grew this season on his own. 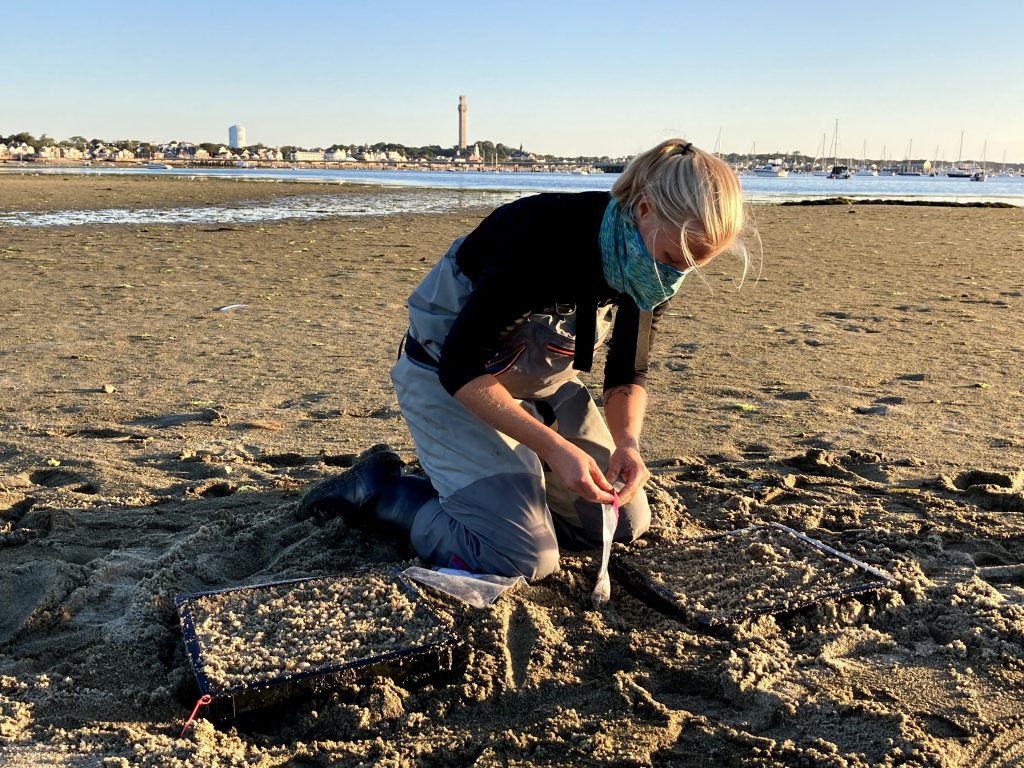 13. Harriet Booth places the small surf clams into the boxes. The next step is to put protective mesh netting over the top to protect them from birds, crabs, and carnivorous snails. 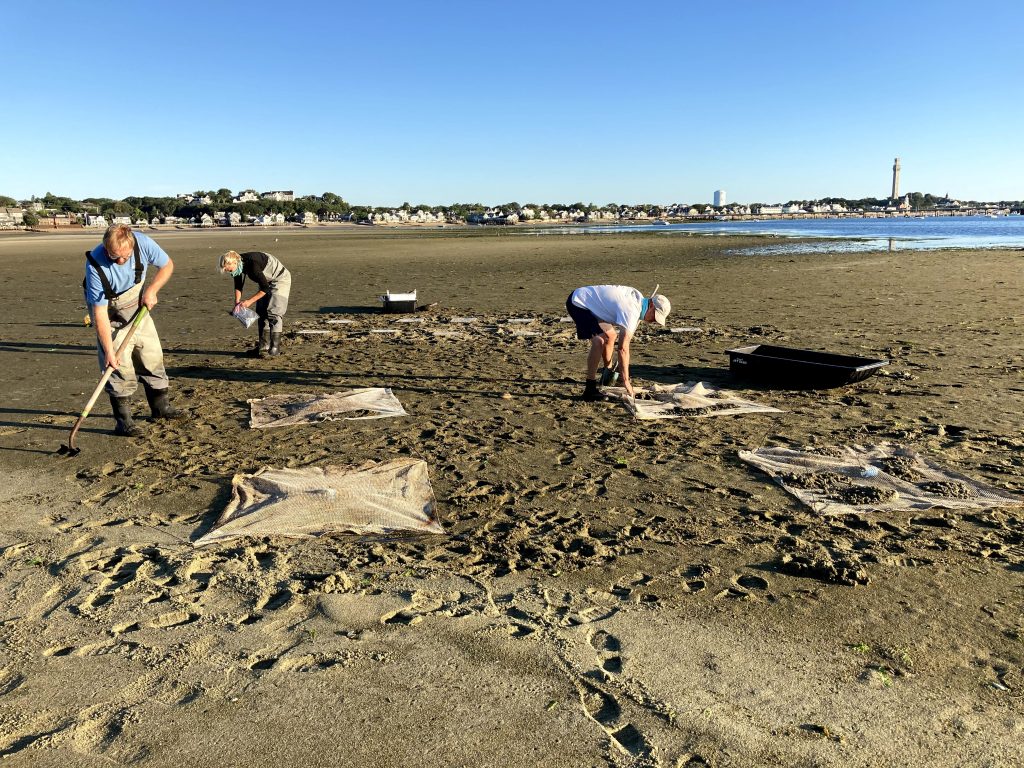 14. The surf clams at this site are planted in the experimental boxes and also in a type of gear known as “Florida bags” since that’s the state they are often used in. 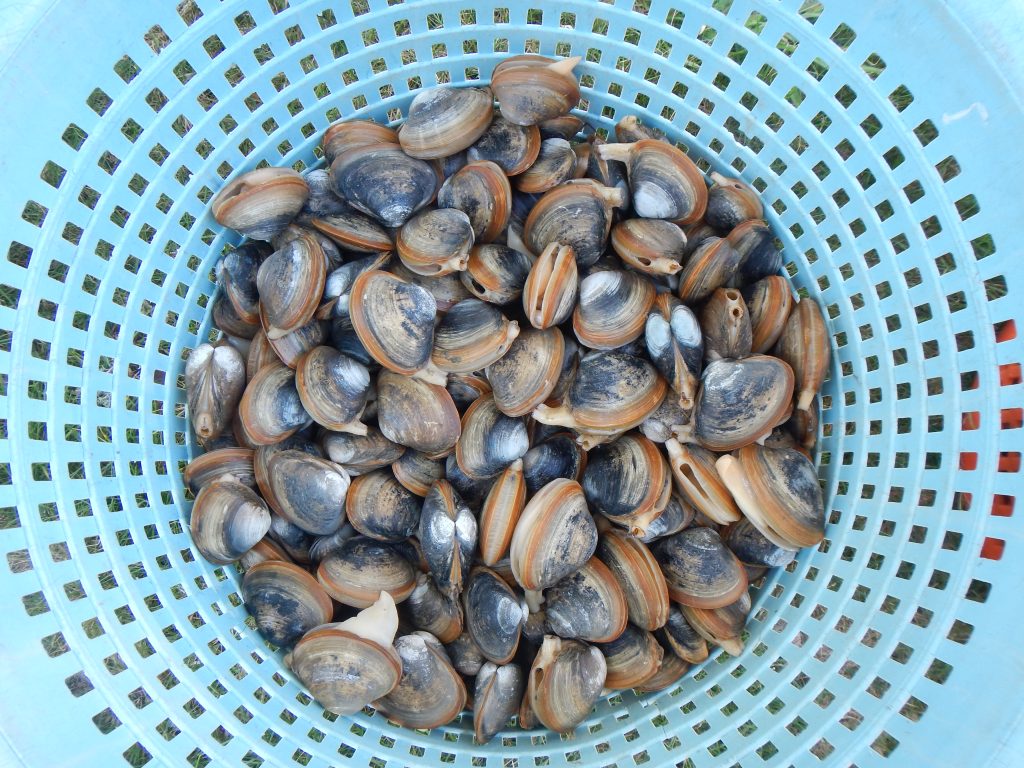 15. This is the goal of the project – to assist the shellfish farmers of Massachusetts to harvest beautiful, tasty, nutritious shellfish from their grants. 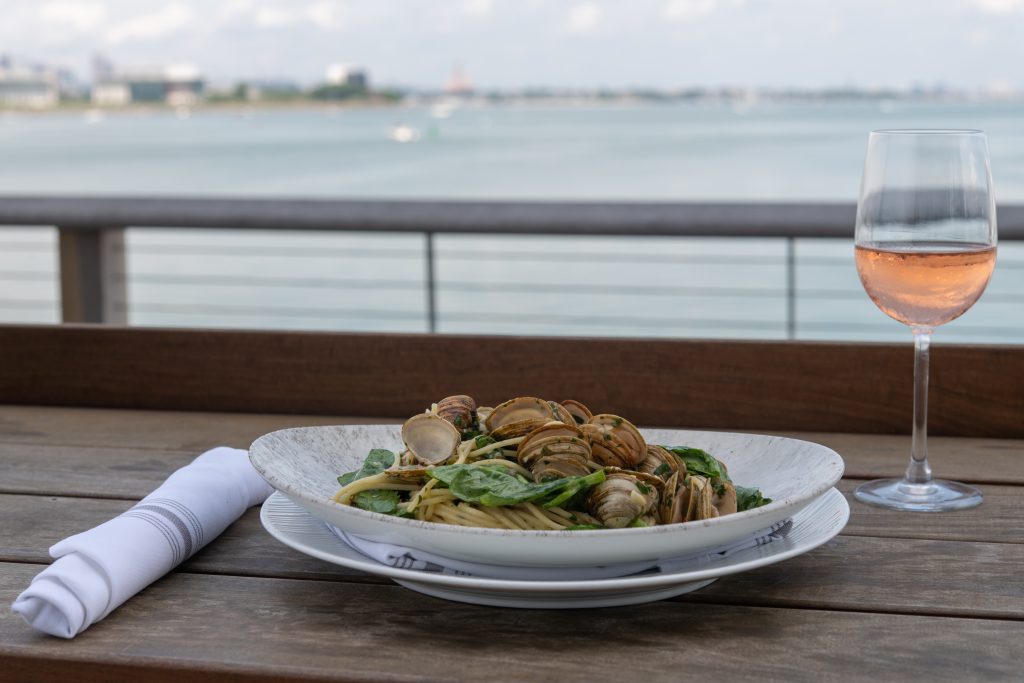 16. And to sell them to restaurants where they can be enjoyed by all!© Christine Hochkeppel/Salty Broad Studios