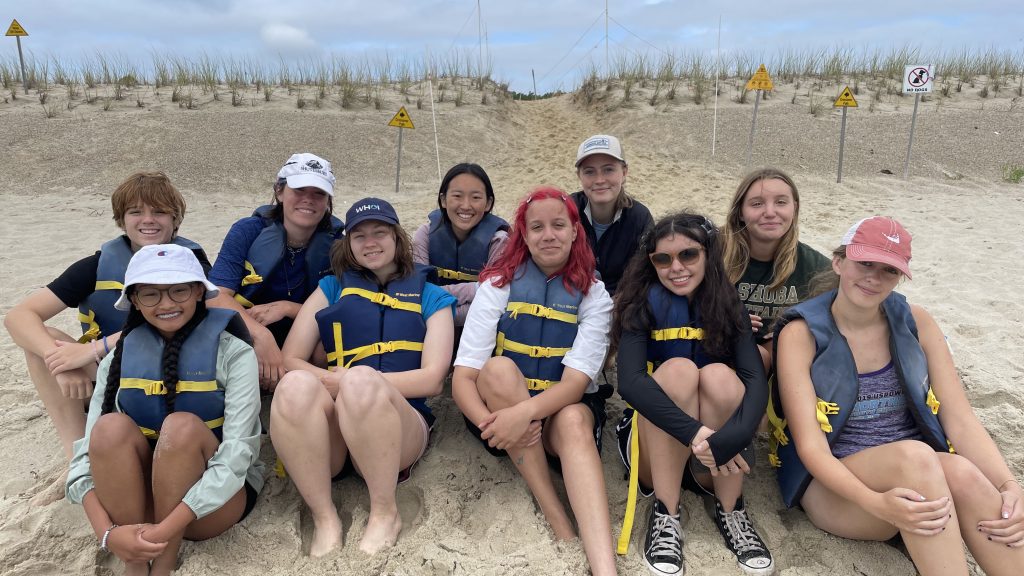 This summer, I participated in a week-long program in Woods Hole on Cape Cod. The Woods Hole Oceanographic Institution (WHOI) Sea Grant / Earthwatch Girls in Science Fellowship provides an opportunity for young, aspiring scientists to work in the field with professionals, make impactful contributions to real research, and learn about countless STEAM professions.

The expedition runs for two weeks every summer, and 10 fellows are selected each week for this fully funded program.

Since we came from all around Massachusetts, fellows had the option of taking the bus or train to the expedition or driving to the campus – we stayed on the Sea Education Association (SEA) campus but spent time on the WHOI campus touring labs.

When I arrived at the SEA campus, I found a field of young adults and their parents, educators, and scientists. I thought I was the only fellow there. Everyone looked so mature, and it would be hours before I learned that most of them were younger than I.

It was only after I COVID tested and chose a bedroom that I realized I was already surrounded by the other fellows. They were standing around a white tarp holding poles. A few poles still lay on the ground; I approached one and awaited instructions. It became clear to me that only two of the people standing around the tent were adults, and as I watched them, the others appeared younger and younger before my eyes. 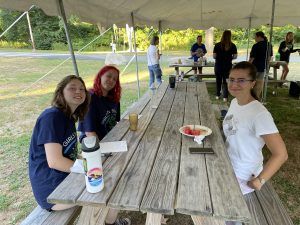 Eden sitting with new friends under the tent the fellows helped erect.

That day, in the sweltering Cape Cod heat, we built a towering tent that would stand for the next two weeks.

Amelia took a pole to the face; Grace and Anna hammered stakes into the ground relentlessly, only to remove and replant them as we adjusted the tent; I lost my pole to the wind more than a few times. I learned about the resilience and determination of every member of the expedition on the first day we met.

Later that day, I made a sign for my bedroom door with stickers, stamps, and markers from Rebecca, one of our expedition facilitators. I never ended up hanging it, but it served as a nice decoration on our cabin’s kitchen table.

In our kitchen was a calendar for house chores (composting, cooking, etc.), which we divided amongst ourselves. The last thing we did on our first day in Woods Hole was learn about “stories”: At the end of the expedition, we would tell our “stories,” recounting the important parts of our lives that had led to our being on the expedition, and what we would do in the future. 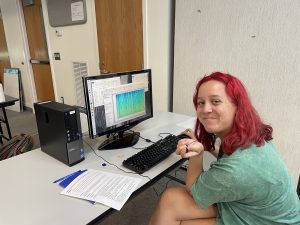 Eden Salley takes a break from working on dolphin sound data to pose for a shot.

The research-based portion of the fellowship surrounded a dolphin pod in Sarasota, Fla. We studied audio recordings using spectrograms (visual graphs of sound), differentiating among snapping shrimp, boat noises, manatees, and the focus of our studies: dolphin whistles.

In order to better understand the process of audio recording underwater, we made our own fully functional hydrophones. We would use these later to record Claire and Amelia screaming underwater. We would also tow them behind kayaks, recording the underwater sounds of an estuary.

I think a lot of the fellows’ favorite time in the field was the whale watch. I was just a tiny bit seasick during the whale watch – and it was really cold.

I think for some of the other girls, that was not the most pleasant experience, but it was so great to see right whales and humpbacks – we even got to see a calf and her mother!

Personally, my favorite part of the expedition was the day we went kayaking. We got really good ice cream, and we got to tow our hydrophones behind our kayaks. We also got to walk on a barrier beach and learn about estuaries. Surrounded by mansions, my boat mate grew suddenly curious about real estate prices.

There were two nights during which we did “speed-dating” with scientists; the first night, we met some slightly older women who were already through grad school and well into their careers. The next night, we met people who were still deciding their career paths. It was really cool to see how some of the older women continue to try new jobs. Someone was a theater major who ended up a marine biologist. That was a very cool story that stuck out to me. 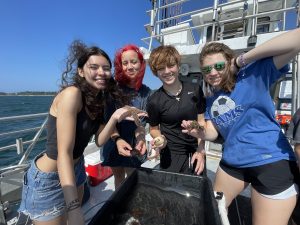 The fellows explore a host of animals brought up during a trawl on afternoon trawl on a boat trip in Vineyard Sound.

For those interested in taking part next summer, applications open in January. High school students entering their junior year or senior year can participate in the program. Potential fellows have to prove their interest in the program by answering questions about scientific interests, and also need a recommendation letter from a science teacher. For information about all of the WHOI Sea Grant programs, go to https://seagrant.whoi.edu/.

Going forward, especially as I apply to colleges and universities, I know what I’m looking for. My experience in Woods Hole helped me learn that I value a supportive community environment. I also learned that I want to pursue a career in STEAM, and that it’s ok if I don’t know exactly what that’s going to look like for me. There are countless ways I can help my community and our planet while studying geology, oceanography, hydrology, or any number of other STEAM courses.