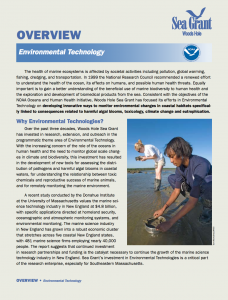 Environmental Contaminants and Fish Reproduction
Not if, but how? That is the question WHOI postdoctoral investigator Joanna Wilson is asking about how certain environmental contaminants effect marine and freshwater fish reproduction. By applying new research tools—advanced mass spectrometry and proteomics—Wilson and her former graduate advisor, John Stegeman, a WHOI senior scientist, will measure proteins associated with exposure to a group of contaminants known as estrogenic compounds. Estrogen is a key steroid in the control of reproduction in vertebrates: successful reproduction requires control over estrogen levels in both adults and the developing embryo. “The possibility that chemicals may act to disrupt development and/or reproduction is perhaps the most significant concern in environmental toxicology,” says Wilson. “Understanding the mechanisms—both direct and indirect—of chemical exposure on fish reproduction is critical for judging whether chemicals in the environment are endocrine disrupters.” Recent studies have demonstrated that polychlorinated biphenyls (PCBs) and their metabolites appear to interfere with several points along the estrogen pathway. Together, Wilson and Stegeman hope to monitor changes in all proteins along this pathway, in order to identify the key sites of action for environmental estrogens—particularly for those compounds that have indirect mechanisms of action. If successful, their results will advance what is currently known about the reproductive function in fish and will present a new understanding of the mechanisms of toxicity for these compounds. Photo courtesy of Stacey Lance, Colby College

How Contaminants “Turn On” Fish Genes
Biomarkers and bioassays are, simply defined, tools developed by researchers to predict or measure a specific biological process. This study, using the Atlantic killifish as a model, will investigate how certain kinds of contaminants alter the set of genes that are expressed, or turned on, in fish. Sibel Karchner, a WHOI research specialist, and Mark Hahn, a WHOI associate scientist, will focus on a group of contaminants known as ortho-substituted polychlorinated biphenyls (ortho-PCBs); the PCBs most abundant in environmental samples. Neither the toxic potential nor the mechanisms by which these ortho-PCBs cause toxicity in fish are well understood. “Though much effort has gone into measuring the concentrations of ortho-PCBs in fish over the years, we still know little about how these chemicals might be interfering with normal cellular processes in fish,” says Hahn. This study will make use of molecular biological techniques to characterize the genes and proteins involved in ortho-PCB toxicity. Ultimately, this study will lead to the development of bioassays and biomarkers that can be used to study the presence and mechanisms of ortho-PCBs in marine and aquatic systems, which, in turn, will aid in assessing the impact of anthropogenic chemicals in the marine environment. Photo credit: Tom Kleindinst, WHOI 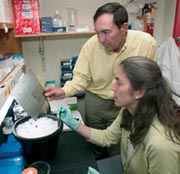 Two Technologies, One HABs Detection Procedure
As the frequency, severity, and negative impacts associated with harmful algal blooms (HABs) increase worldwide, monitoring for the presence of harmful algal species and toxins becomes even more critical. This project combines the skills and expertise of two research laboratories in a collaborative effort to develop a cell detection and enumeration tool that can be used in the laboratory, on a ship, or built into an automated collection device. Don Anderson, a WHOI senior scientist and director of the U.S. National Office of Marine Biotoxins and Harmful Algal Blooms, specializes in the development of molecular probes to detect and count harmful algal cells. David Walt, a chemistry professor at Tufts University, has pioneered the use of fiber optic technology as a detection tool. Together, they have adapted fluorescence-based fiber optic microsphere technology to detect nucleic acids specific to one harmful algal species, Alexandrium fundyense. The first task of this project aims to lower the limit of detection from the current 200 cells per liter (cells/L) to 50 cells/L. Some HAB species can be dangerous at concentrations as low as 200 cells/L; in order to provide an early warning, monitoring programs must be able to detect such species at the lowest possible concentrations. The second task involves application of the fiber optic detection method developed for one species to several individual HAB species for which molecular probes are readily available. Lastly, collaborators will develop ways to analyze multiple HAB species simultaneously, using a single fiber bundle—a critical feature for locations in which multiple HAB species can occur, often at the same time. “The simplicity of this procedure and the ability to re-use the beads and fibers hundreds of times without the loss of sensitivity makes this technology a promising candidate for further development,” explains Anderson. Photo credit: Tom Kleindinst, WHOI

Vehicle Emissions and Atmospheric Deposition
Nitrogen pollution in coastal ecosystems can lead to eutrophication—a condition associated with degraded coastal habitat, changes to community structure, and increased occurrences and duration of harmful algal blooms. As inputs of nitrogen to coastal waters are on the rise—due in part to population growth in the coastal zone—coastal managers will require accurate and location-specific information about the contribution of nitrogen sources in order to make effective management decisions. This project investigates atmospheric deposition, perhaps the least understood and quantified source of nitrogen. (Estimates for some northeastern U.S. estuaries list atmospheric deposition as the source for up to 90 percent of all nitrogen inputs.) While most studies to date have focused on regional-scale deposition patterns, researchers will look at atmospheric deposition locally by measuring vehicle emissions around two Cape Cod embayments. Led by Cornell University professor Bob Howarth, author of several reports on nitrogen inputs to coastal estuaries, Cornell senior research associate Roxanne Marino, and Woods Hole Research Center scientist Eric Davidson, researchers will design a series of collection techniques to characterize the runoff of nitrogen from impermeable surfaces, where they expect atmospheric deposition to be high and retention to be very low. They will also look at the relative importance of wet and dry deposition along transects from the roadways. “If we find that the emissions of vehicles from local traffic prove to be an important source of nitrogen pollution to coastal waters,” says Howarth, “it may encourage a variety of policy approaches for reducing this source, including alternative transportation strategies, tightening of vehicle emission standards on SUVs and trucks, and treating road runoff.” 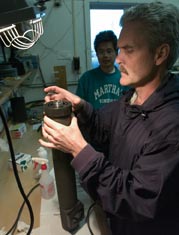 Compact Digital Imaging System Aids in Species ID
“The sparseness of species-level data is the single biggest impediment to development of accurate population models of marine organisms,” says Cabell Davis, a plankton biologist at WHOI. Currently available sampling methods—from traditional manual net, pump, and bottle collections to newer automated acoustical and video sampling systems—do not provide the kind of high-resolution abundance data at the level of species that is necessary for modeling and predicting populations. Davis is working with engineers at WHOI, MIT, and the Navy toward development of an autonomous multi-scale digital imaging system to identify and map distributional patterns of aquatic species of plankton, micronekton (shrimp, for example), and nekton (squid and fish, for example). “The new method will use holographic imaging technologies to capture high quality three-dimensional images for accurate species identification,” says Davis. The new imaging system will be compact so that it can be incorporated into robotic sampling platforms—such as autonomous underwater vehicles (AUVs)—for remote acquisition of species-level data. Such information is of critical importance to fisheries and water quality research and management. Photo credit: Tom Kleindinst, WHOI