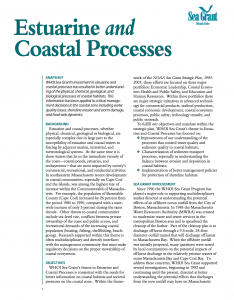 WHOI Sea Grant’s investment in estuarine and coastal processes has resulted in better understanding of the physical, chemical, geological, and biological processes of coastal habitats. This information has been applied to critical management decisions in the coastal zone including water quality issues, shoreline erosion and storm damage, and food web dynamics.

Estuarine and coastal processes, whether physical, chemical, geological or biological, are especially complex due in large part to the susceptibility of estuarine and coastal waters to forcing by adjacent marine, terrestrial, and meteorological systems. At the same time it is those waters that lie in the immediate vicinity of the coast — coastal ponds, estuaries, and embayments—that are most impacted by society’s commercial, recreational, and residential activities. In southeastern Massachusetts recent development in coastal communities, especially on Cape Cod and the Islands, was among the highest rate of increase within the Commonwealth of Massachusetts. For example, the population of Barnstable County (Cape Cod) increased by 26 percent from the period 1980 to 1990, compared with a state-wide increase of only 5 percent during the same decade. Other threats to coastal communities include sea-level rise, conflicts between private ownership of the coast and public access, and recreational demands of the increasing coastal population (boating, fishing, shellfishing, beach-going). Research supported within this theme is often multidisciplinary and directly interfaces with the management community that must make regulatory decisions on the proper stewardship of coastal ecosystems.

WHOI Sea Grant’s theme in Estuarine and Coastal Processes is consistent with the needs for better information on coastal habitats and societal pressures on the coastal zone. Within the framework of the NOAA Sea Grant Strategic Plan, 1995-2005, these efforts are focused on three major portfolios: Economic Leadership, Coastal Ecosystem Health and Public Safety, and Education and Human Resources. Within these portfolios there are major strategic initiatives in advanced technology for commercial products, seafood production, coastal economic development, coastal ecosystem processes, public safety, technology transfer, and public outreach.

To fulfill our objectives and mandate within the strategic plan, WHOI Sea Grant’s theme in Estuarine and Coastal Processes has focused on:

Since 1990 the WHOI Sea Grant Program has played a major role in supporting multidisciplinary studies directed at understanding the potential effects of an offshore ocean outfall from the City of Boston, Massachusetts. In 1985 the Massachusetts Water Resources Authority (MWRA) was created to modernize water and sewer services in the metropolitan Boston area and to spearhead the cleanup of the harbor. Part of the cleanup plan is to discharge effluent through a 9.5-mile, 24-foot diameter outfall tunnel that will discharge effluents to Massachusetts Bay. When the offshore outfall was initially proposed, many questions were raised by local communities on the potential impacts of effluent discharge in the relatively pristine waters of outer Massachusetts Bay and Cape Cod Bay. To address these concerns, WHOI Sea Grant supported several investigations, beginning in 1992 and continuing until the present, directed at better understanding the potential effects that discharges from the new outfall may have on Massachusetts and Cape Cod Bays. These include studies of water circulation, nutrient enrichment, food web dynamics, and harmful algal blooms. WHOI Sea Grant will continue to support investigations on fundamental processes in the offshore habitats of Massachusetts and Cape Cod Bays when the outfall becomes operational in order to identify the natural variability in ecosystem parameters and help explain the trigger points of post-outfall effects.

Other studies of coastal processes supported by the WHOI Sea Grant Program have led to the development of new tools for assessing water quality conditions, new models that help explain the dynamics of barrier beaches and coastal lagoons, and a better understanding of historical patterns in sea level rise. Our coastal hazards outreach effort is directed at integrating a scientific understanding of the processes that maintain coastal landforms with the management concerns arising from the effects of these processes on coastal towns.

The following programs or special events:

Contributions to the Scientific Community

Research projects supported between 1990-2000 have yield numerous advances and discoveries within the scientific community. A few highlights include: