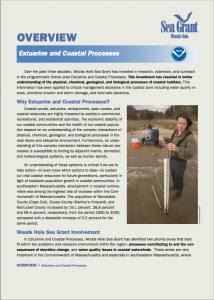 Oil Undercover: Ecological Effects of a 30-year-old Oil Spill
Since 1969, when the barge Florida, headed for the Cape Cod Canal, ran aground and spilled over 650,000 liters of No. 2 fuel oil on a pristine section of Cape Cod coastline, Woods Hole scientists have studied the salt marsh sediments for ecological effects and recovery. Immediate effects were devastating: large kills of fish, crustaceans, worms, mollusks, and other invertebrates extending from the shoreline out to depths of 7–10 meters and large areas of dead Spartina marsh grasses. In the first years after the spill, considerable oil content was measured in marsh and estuarine organisms, and consequent changes in species composition and benthic fauna density was recorded. Twenty years later, scientists found that aromatic hydrocarbons in surface sediments had largely disappeared, oil concentrations in organisms were much lower, and marsh grass recovery was well underway. Thirty years later, marsh vegetation surrounding Wild Harbor appeared healthy and no different from nearby, unaffected marshes. Yet cores collected in 2000 show substantial residue of No. 2 fuel oil below 10 cm in the salt marsh sediments. Could this subsurface reservoir of petroleum still be a source of ecological change? To find out, Boston University Marine Program professor Ivan Valiela and graduate students Ylva Olsen and Jennifer Culbertson are examining salt marsh biota for oil spill-related effects, as well as species most likely to be exposed to remaining oil, such as salt marsh grasses, fiddler crabs, and ribbed mussels. Using mass spectrometry, researchers will test whether resident organisms exhibit long-term bioaccumulation of oil and make comparisons across the trophic levels of the food web. Additionally, transplantation experiments will determine whether oil-free biota (cordgrass and mussels) respond to exposure at the oiled habitat to the same degree as the chronically-exposed biota. “We expect that our results will be useful to coastal resource managers and others involved in developing oil spill management plans, since we will be able to document the long-term effects not readily detected in short-term studies,” says Culbertson. Photo credit: Anna Carter, Boston University Marine Program

Undergrads Track Groundwater Pathways to Casco Bay
Groundwater refers to the water that usually lies beneath the surface of the land—in cracks and spaces in soil, sand, and rock—and moves through an aquifer on its way to a discharge point, typically a lake, river, estuary, or the coastal ocean. Tracking and quantifying groundwater discharge involves the use of natural geochemical tracers. WHOI geochemist Dan McCorkle has developed a radiocarbon-based approach to studying groundwater discharge into estuaries and the coastal ocean. Bowdoin College professor Ed Laine, working with undergraduate students, recently identified thin, near-bottom layers of low-salinity water in several parts of Casco Bay, Maine. Through this project, the researchers will team up to introduce Laine’s students to a range of approaches designed to help them recognize and quantify submarine groundwater discharge (SGWD), while learning state-of-the-art techniques in environmental isotope geochemistry. Natural geochemical tracers—such as radium, radon, and C14—provide researchers with tools needed to identify and quantify groundwater inputs to coastal and estuarine systems. This enables researchers to make connections between SGWD inputs and the transport of nutrients—and pollutants—from land-based sources. Developed for carbonate-dominated geological environments, common to the southeastern coastal U.S., this relatively new approach has never been used to estimate SGWD estimates in a hard rock setting. Casco Bay’s bedrock environment presents such an opportunity. “Problems common to many coastal areas point to the need to better understand groundwater–surface water–seawater interactions,” explains McCorkle. Such problems include saltwater intrusion due to increasing demands on aquifers and nutrient loading of groundwater and surface water—and the subsequent discharge into estuaries and the coastal ocean. “Geochemical tracers can provide a valuable perspective on these interactions.” 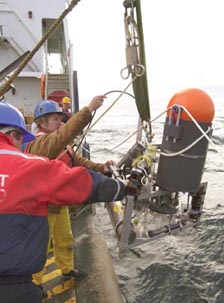 Long before 1988, when presidential candidate George Bush declared it “the filthiest harbor in America,” the sediments and water quality of Boston Harbor have been scrutinized. In 2004, nearly four years after the region’s sewage discharge was diverted from the harbor to a site nine miles offshore in Massachusetts Bay, scientists study the harbor with new questions: what do the sediments near the original discharge site look like today? have things improved? and what about sediments near the new outfall discharge? Bill Martin is part of a team of investigators sampling harbor and bay sediments to answer those questions. Martin, along with his WHOI colleagues Roger Francois and graduate student Linda Kalnejais, joined forces with a USGS Woods Hole Marine Field Center investigation led by Mike Bothner, whose data from the site goes back to the late 1970s. “Mike’s data show that heavy metal concentrations in the harbor sediments have been decreasing,” explains Martin. “We want to know whether the decrease is due simply to dilution of polluted sediments by clean inputs, or rather, to transfer of the metals to other locations.” In an earlier phase of the study, also funded by Woods Hole Sea Grant, investigators collected and analyzed sediment cores from a harbor site (Hull Bay) and a Massachusetts Bay site (just west of the outfall) to get a better understanding of sediment cycling and factors controlling heavy metal cycling. The current phase focuses on metal cycling within the sediments, which appears to result in a concentrated layer of metals in the solid phase, near the sediment surface. “If that is the case,” says Martin, “metals could be re-suspended by bottom currents and transported elsewhere.” An expanded sampling program will include a third fine-grained sediment site, this one in Cape Cod Bay. Based on storm wind and sediment transport patterns, Cape Cod Bay may accumulate metals that have been remobilized from the Boston Harbor site. Researchers will investigate whether the sedimentary behavior of metals at the Cape Cod Bay site are similar to those at the outfall site in Massachusetts Bay. “What we find out will help us project the effects of anthropogenic metal release in the region and interpret future monitoring data,” says Martin. “And that information should be applicable to other urban coastal areas—a key goal of this project.” Photo credit: Dann Blackwood, USGS