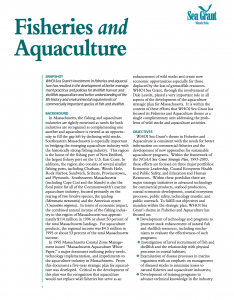 Snapshot
WHOI Sea Grant’s investment in fisheries and aquaculture has resulted in the development of better management practices and policies for shellfish harvest and shellfish aquaculture and better understanding of the life history and environmental requirements of commercially important species of fish and shellfish.

Background
In Massachusetts, the fishing and aquaculture industries are tightly entwined as needs for both industries are recognized as complementing one another and aquaculture is viewed as an opportunity to fill the gap left by declining wild stocks. Southeastern Massachusetts is especially important in bridging the emerging aquaculture industry with the historically strong fishing industry. This region is the home of the fishing port of New Bedford, the largest fishery port on the U.S. East Coast. In addition, the region also consists of several smaller fishing ports, including Chatham, Woods Hole, Rock Harbor, Sandwich, Scituate, Provincetown, and Plymouth. Southeastern Massachusetts (including Cape Cod and the Islands) is also the focal point for all of the Commonwealth’s marine aquaculture industry, focused primarily on the rearing of two bivalve species, the quahog (Mercenaria mercenaria) and the American oyster (Crassostrea virginica). In terms of economic impact, the combined annual income of the fishing industry to this region of Massachusetts was approximately $114 million in 1996 or about 50 percent of the total Massachusetts landings. For aquaculture products, the regional income was $4.5 million in 1995 or about 53 percent of the total Massachusetts income.

In 1995 Massachusetts Coastal Zone Management issued “Massachusetts Aquaculture White Paper,” a major document outlining policy needs, technology implementation, and impediments to the aquaculture industry in Massachusetts. From this document a five-year strategic plan for aquaculture was developed. Critical to the development of this plan was the recognition that aquaculture would not replace wild fisheries but serve as an enhancement of wild stocks and create new economic opportunities especially for those displaced by the loss of groundfish resources. WHOI Sea Grant, through the involvement of Dale Leavitt, played a very important role in all aspects of the development of the aquaculture strategic plan for Massachusetts. It is within the context of these efforts that WHOI Sea Grant has focused its Fisheries and Aquaculture theme as a single complimentary unit addressing the problems of wild stocks and aquaculture activities.

Objectives
WHOI Sea Grant’s theme in Fisheries and Aquaculture is consistent with the needs for better information on commercial fisheries and the development of new approaches for sustainable aquaculture programs. Within the framework of the NOAA Sea Grant Strategic Plan, 1995-2005, these efforts are focused on three major portfolios: Economic Leadership, Coastal Ecosystem Health and Public Safety, and Education and Human Resources. Within these portfolios there are major strategic initiatives in advanced technology for commercial products, seafood production, coastal economic development, coastal ecosystem processes, public safety, technology transfer, and public outreach. To fulfill our objectives and mandate within the strategic plan, WHOI Sea Grant’s theme in Fisheries and Aquaculture has focused on:

Sea Grant Involvement
Since 1990 the WHOI Sea Grant program has made an investment in attracting and supporting activities in the fields of fisheries and aquaculture. These efforts have focused on:

(1) Studies on basic life history requirements of commercially important species of fish and shellfish, interfacing with national programs such as GLOBEC and SABRE;

(2) Identification of diseases in marine shellfish and development of practices that minimize the transfer of disease to unaffected stocks;

(3) Application of the tools of molecular biology to better understand the reproductive biology and development of commercially important stocks; and

(4) Development of advisory and outreach activities to foster information transfer, education and development of fisheries and aquaculture programs.

Since 1997 WHOI Sea Grant has carefully integrated its activities in fisheries and aquaculture with those of Barnstable County via the Cape Cod Cooperative Extension and the Southeastern Massachusetts Aquaculture Center (SEMAC). Through Dr. Leavitt’s involvement in each of these efforts WHOI Sea Grant presents a well integrated and cooperative effort among academic scientists, regional and state government, and industry.

The following programs or special events:

Contributions to the Scientific Community
Research projects supported between 1990-2000 have yield numerous advances and discoveries within the scientific community. A few highlights include: