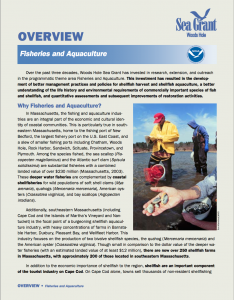 Fish Otoliths Contain Clues to Larval Distribution Mystery
How do you track a moving target? It depends on the size of the target. WHOI fish ecologist Simon Thorrold and research associate Jennifer FitzGerald are taking aim at a very small target: larval Atlantic cod (Gadus morhua). Like most marine fish, cod have a pelagic larval phase, meaning that their dispersal range is, potentially, quite wide. Understanding larval dispersal is critical to fisheries management for a number of reasons, including population connectivity and its direct correlation to colonization patterns of new habitats, the resiliency of populations to harvest, and the design of marine protected areas (MPAs). Developed for land-based species, traditional methods of tracking populations do not translate well to the marine environment. Mark–recapture approaches, for example, can be ruled out for a number of reasons: cod spawn millions of eggs, yet mortality is extremely high (some estimates are 99.9 percent egg mortality), making recovery of a tagged individual highly unlikely. Another approach, genetic tags, is also problematic in species with little genetic variation among populations. Recent work with fish otoliths, however, shows great promise as natural tag. Otoliths are formed through concentric additions—on a daily basis—of mineralized tissue around a central nucleus. Not only do these additions provide an accurate means of determining age and growth, their chemical composition reflects the chemical composition of the water that passed across the gills and intestinal membranes of a fish on that same day. Presently, elemental signatures can be measured in otoliths at spatial scales approaching that of daily increments. However, physiological effects, such as differences in growth rates, may decouple otolith composition from the chemistry of ambient waters in which the fish is living at any given point in time, compromising these signatures. Using mass spectrometry, investigators will develop methods to quantify new isotope systems that can serve as geochemical proxies for temperature in cod otoliths, and calibrate these systems with laboratory-reared cod larvae maintained at constant temperatures. Ideally, these tracers will be used to accurately reconstruct temperature histories of individual larvae, shedding light on a number of key unanswered questions for Atlantic cod populations and their management. 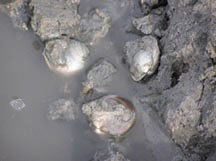 Searching for Disease in All the Right Places
In 1995, significant mortality in cultured hard clams, or quahogs (Mercenaria mercenaria) from multiple sites in Provincetown and Duxbury, Massachusetts, devastated the local industry. Growers turned to Woods Hole researchers who, with emergency funding from Sea Grant, identified a parasite as the cause. Since that time, the parasite (named QPX for quahog parasite unknown) has been detected in cultured and wild clams in other northeast U.S. locations. While QPX research has led to many important discoveries about the parasite, important questions remain unanswered, including the environmental source of the QPX organism. One theory proposes that QPX is found naturally along all Atlantic coast sediments and infects hard clams during stressful environmental events. Recent studies suggest that, while climate stress and adaptation may play a part in the occurrence of the disease in some stocks, this may be only part of the story. Another theory suggests that QPX is present only in the fauna and/or sediment of specific bays or estuaries, or that QPX is associated with a specific alternate or carrier host. Using traditional histological and molecular tools, WHOI biologist Rebecca Gast and Marine Biological Laboratory pathologist Roxanna Smolowitz, along with colleagues from Virginia Institute of Marine Sciences and Roger Williams University, will screen for the presence of the QPX organism in samples of sediment, water, algae, and invertebrates from sites where QPX infections have occurred and where they have not. “This project will identify potential alternate hosts or environmental refuges that may harbor the QPX organism outside of the clam,” explains Gast. “Performing surveys at two distant sites—both impacted by the disease—helps to identify commonalities, and will assist [the industry and regulators] in developing aquaculture management plans.” Photo credit: Rebecca Gast, WHOI 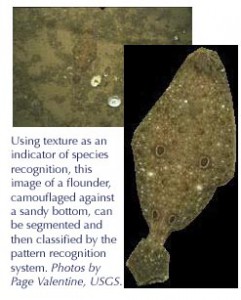 Taking the Guesswork out of Species Recognition
Defining essential fish habitat is a critical component of the Magnuson–Stevens Fishery Conservation and Management Act. Multi-species fisheries management requires an understanding of the critical habitat of all species in communities where commercially important finfish and shellfish stocks thrive. To date, habitats have been classified and characterized using acoustic techniques, sidescan sonar, remotely operated vehicles, video imaging, and submersibles. While all have important capabilities, they share an inability to characterize images to describe substrate and habitat automatically and rapidly. What is needed, says WHOI biologist Sanjay Tiwari, “is a set of automated image processing tools that can be trained to classify an infinite variety of habitats based on a scheme that we as humans consider important to benthic organisms.” The scheme of choice: texture. Working with fellow WHOI biologist Scott Gallager, they will first define the signatures of texture and color for each target species—accounting for variations in illumination, scale, and orientation—and then segment images into different textures, a process called texture segmentation. Next, they will develop a pattern recognition system, or classifier. The anticipated result—a robust algorithm for the segmentation of complex underwater images—will address a variety of needs in the oceanographic community, including habitat characterization and identification of pelagic and benthic flora and fauna. 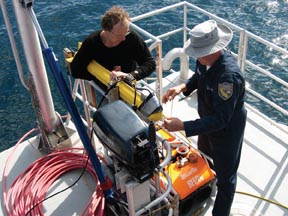 Co-principal investigator Roger Hanlon holds the sidescan sonar while California Department of Fish and Game Captain Raymond Michalski, attaches a video camera to the vehicle. The camera allows for visual ground-truthing while the sonar registers echoes from the seafloor and benthic organisms such as squid egg beds. The surface vessel platform is R/V Shearwater, owned and operated by the NOAA Chanel Islands National Marine Sactuary in Santa Barbara, CA. Photo by Ken Foote, WHOI.

Acoustics Used to Find Squid Spawning Grounds
The west coast U.S. fishery for squid (Loligo opalescens) is valued at $24–30 million annually and is estimated to be at or near maximum sustainable yield. Yet fishing pressure continues—in many cases, directly on sites of egg deposition. This disruptive practice, says squid biologist Roger Hanlon of the Marine Biological Laboratory, may significantly affect mate selection, egg laying, and even the viability of the egg capsules. Squids live only 6–12 months, thus successful annual recruitment to the fishery is mandatory. “Unlike other marine animals,” explains Hanlon, “squids offer a great advantage because they deposit egg capsules in large communal beds directly on the substrate. That allows us a direct measure of reproductive success, and provides a unique biological assay to begin to assess annual recruitment potential.” Hanlon, along with WHOI senior scientist Ken Foote, a leader in the ocean acoustics field, will configure, test, and utilize the latest acoustical technology to survey primary egg beds along the southern and central California coast and locate the primary inshore spawning grounds and egg beds over two fishing seasons. During the first phase of the project, investigators found a very suggestive association of backscattering pattern from side-scan sonar and occurrence of squid egg beds during the initial cruise in Monterey Bay. Similarly suggestive backscattering patterns were observed during a second cruise in southern California; this association was demonstrated during a third cruise in Monterey Bay. During Cruise 3, small numbers of lone males were seen scattered widely on the bottom, mainly in the general vicinity of eggs, while paired, spawning squids were sighted only occasionally. This unusual observation, says Hanlon, suggests that the operational sex ratio was far higher than observed over the previous three years in the same area—now heavily skewed towards males. Additional cruises will refine and extend the sampling methodology, and provide a broader-scale survey of the distribution of squid egg beds in Monterey Bay.