October 31, 2017--Two new grants to the Woods Hole Sea Grant program totaling more than $650,000 will support research aimed at expanding aquaculture production in Massachusetts. The projects won funding as part of a national strategic investment in aquaculture by the NOAA Sea Grant Program. 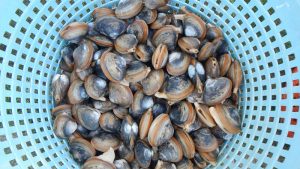 These surf clams (Spisula solidissima) were grown under nets in Barnstable Harbor on Cape Cod and harvested in their second year of growth. (Photo by Abigail Archer, Woods Hole Sea Grant and Cape Cod Cooperative Extension)

One project, “Increasing Northeast U.S. Marine Aquaculture Production by Pre-permitting Federal Ocean Space,” aims to simplify the process and reduce the cost of obtaining permits to farm marine species in U.S. waters. Led by Hauke Kite-Powell, a research specialist at Woods Hole Oceanographic Institution, the project will conduct fisheries, protected species, shipping industry, and other reviews on selected offshore areas in advance, to reduce the regulatory burden for aquaculture growers.

“The permitting process for aquaculture in federal waters can be onerous and complex,” said Kite-Powell. “Our approach is to work with major stakeholders, including the aquaculture industry, the federal and state permitting agencies, and the fishing/shipping/protected species communities, to identify suitable areas in federal waters off New England, and identify a range of aquaculture gear types and native species for which they can be pre-permitted. With the pre-permitting process for these areas completed, we will establish a mechanism for aquaculture ventures to gain access and begin production.”

Ultimately, the project, which is estimated to take two years and involves the Massachusetts Aquaculture Association and researchers at the New England Aquarium and UMass Boston, will determine if this simplified permitting mechanism for aquaculture ventures enhances U.S. aquaculture production.

The Massachusetts shellfish aquaculture industry had an estimated value of $23 million in 2015, with more than 93 percent of production from oyster culture. The industry is currently dominated by a single product – raw oysters served on the half shell.

“Aquaculture production in Massachusetts is growing, but it’s important to have diversity within the industry,” said Abigail Archer, a marine resource specialist with Woods Hole Sea Grant and the Cape Cod Cooperative Extension. “It’s inherently risky to rely on a monoculture of oysters – disease would significantly impact the industry.” 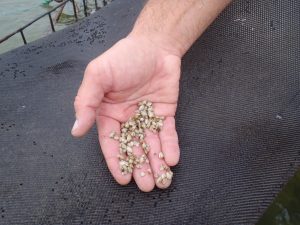 These tiny surf clams (Spisula solidissima) are only a few months old. They are placed in plastic mesh envelopes to protect them from predators and to keep them in place while they grow. (Photo by Kris Clark, Cape Cod Cooperative Extension)

Archer is the lead on a second newly funded project to explore the potential to broaden the shellfish aquaculture market in Massachusetts to include two other native clam species – surf clams (Spisula solidissima) and blood arks (Anadara ovalis) as well as shucked oysters (Crassostrea virginica), for those who prefer not to eat raw oysters. The project, a collaboration between Woods Hole Sea Grant, Cape Cod Cooperative Extension, the Cape Cod Commercial Fishermen’s Alliance, and Wellfleet SPAT (Shellfish Promotion and Tasting), will conduct a market analysis of the potential consumer demand for and economic value of culturing alternative species, as well as for shucked oysters.

“We want to get ahead of the curve and diversify, but growers need a certain amount of market-based data before investing in a new species or new markets,” said Archer.

The project builds on past research by Woods Hole Sea Grant and the Cape Cod Cooperative Extension to culture surf clams and blood arks and social science research into consumer appetite for new shellfish products. Archer and her team see this as an important part of their strategic work toassist the regional aquaculture industry to continue to succeed as a growing contributor to the local economy and to the national and global production of farmed marineproducts in an environmentally sustainable manner.

“The shellfish aquaculture industry generates more than $20 million in labor income for the state and has a value of more than $45 million to the Massachusetts economy,” said Congressman William Keating. “The federal investment into these research projects will reduce barriers to growth and expand this important industry.”

Based at Woods Hole Oceanographic Institution, the Woods Hole Sea Grant program supports research and education, and an extension program in concert with the Cape Cod Cooperative Extension, that encourage environmental stewardship, long-term economic development, and responsible use of the nation’s coastal and ocean resources. It is part of the National Sea Grant College Program of the National Oceanic and Atmospheric Administration, a network of 33 individual programs located in each of the coastal and Great Lakes states.

Posted in Fisheries and Aquaculture, News