Charette replaces Dr. Judith McDowell, a scientist emeritus in the Biology department, who has led the program for 24 years.

“I’m thrilled and honored to have been selected as the next director of the Woods Hole Sea Grant Program, and I look forward to serving a program that has served me well throughout my career,” Charette said. 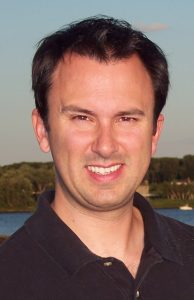 “As a high school student who spent summers on the Cape, I was a subscriber of the program’s newsletter, which played a significant role in my decision to pursue undergraduate and graduate degrees in Oceanography,” he said. “As a newly minted scientist at WHOI, Sea Grant funded my first project, which was to refine a new technique for quantifying groundwater flow into estuaries, a process that carries nutrients from septic systems to the coast and is the root cause of water quality issues here on Cape Cod.”

Woods Hole Sea Grant-funded researchers, Charette said, are “providing valuable insight and new knowledge on the health and functioning of our coastal ecosystems, fisheries and aquaculture, and shoreline erosion in a changing climate.”

“These scientists and program staff are also committed to engaging the next generation of earth and environmental scientists, and our Knauss Fellows are helping to set national policy regarding coastal ocean resources through internships in the legislative and executive branches of our federal government,” he added.

His research focuses on marine chemistry in the coastal and open ocean; use of natural and artificial radionuclides as tracers of oceanographic processes (i.e., coastal groundwater discharge, particulate organic matter cycling, and the fate of trace metals in marine systems) and remote sensing of coastal oceanographic processes using in situ sensors.

Charette and McDowell will lead the program jointly during the next few months to ensure a smooth transition before McDowell steps aside permanently later in 2017, WHOI announced.

Woods Hole Sea Grant supports research, education, and extension projects that encourage environmental stewardship, long-term economic development, and responsible use of the nation’s coastal and ocean resources. It is part of the National Sea Grant College Program of the National Oceanic and Atmospheric Administration, a network of 33 individual programs located in each of the coastal and Great Lakes states.