Dec. 2017 -- Each spring river herring come from the ocean and swim, or “run” up rivers to spawn in ponds and slow sections of rivers. Each fall, Massachusetts river herring wardens gather together to talk about their favorite fish and discuss ways to preserve it. 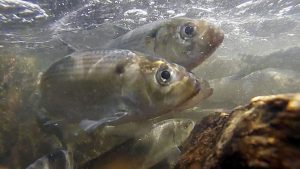 For centuries, people used to gather herring at their local river and use them for food, bait, and fertilizer on a small scale. Some towns auctioned the right to gather fish to the highest bidder, and commercial enterprises would harvest fish by the truckload and sell them on a large scale as bait for fish and lobster, fish-meal, and fertilizer.

Over the past 300 years, what had been a bountiful harvest declined for many reasons including dam construction and poor water quality, but in the late 20th century, herring populations sharply declined to as little as one percent of their historic size.

In 2006, in response to the dramatic drop in herring numbers across the state, the Mass. Division of Marine Fisheries placed a moratorium on harvest. 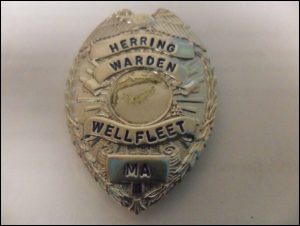 For hundreds of years in Massachusetts and Maine, “herring wardens” have watched over rivers, managed the harvest of river herring, and made sure that the fish have clear passage from the mouth of the river all the way up to the freshwater spawning areas. In modern times, they work closely with the state Division of Marine Fisheries to maintain fish ladders, enforce harvest regulations, and keep an eye on any water withdrawals from the river. In many towns they also work closely with a set of volunteers who are part of a formal Herring or Alewife Committee.

Without a harvest to monitor, the position of town herring warden might have been eliminated, but it wasn’t. In 2010 a group of herring wardens and watershed organizations got together to learn more about why the herring numbers were dropping, and what actions they could take to reverse the decline. They also thought it would be useful to talk with wardens in other towns and compare notes on what was happening in different rivers. In 2011 this group called themselves “The River Herring Network” and applied for grant funding from the Mass Bays program to get organized, hold regular meetings, and communicate with each other. In 2013 Woods Hole Sea Grant got involved supporting Extension Agent Abigail Archer who provides helps organize annual meetings and keeps communication flowing year-round. 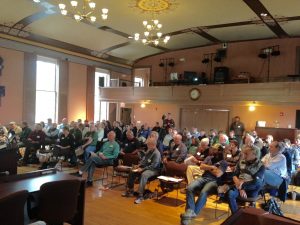 On November 2, 2017 the River Herring Network held their 7th annual meeting in Barnstable. Seventy-three (73) people attended representing 21 different towns, 9 environmental organizations, 5 state and federal agencies, 1 County agency, & 2 academic institutions to hear presentations on a range of topics including the recent re-construction of the Mill Creek fish ladder by the Town of Sandwich with Community Preservation Act funds, research on how best to sample juvenile river herring in ponds, lessons learned from electronic counting efforts, and crowd sourcing the counting of video data. Two students from University of Massachusetts Amherst helped facilitate breakout sessions on how transportation infrastructure like culverts affects herring passage, and on problems wardens are experiencing with aquatic invasive species in their rivers. Based on the discussion, several wardens decided that more information was needed on the effect of invasive plant species on juvenile and adult herring.

A representative from Mass. Marine Fisheries provided an update on management practices and an overview of herring population numbers in Massachusetts and the New England region. The group was told that, though there were some positive signs, their data indicate that river-herring population was still depleted to near historic lows. 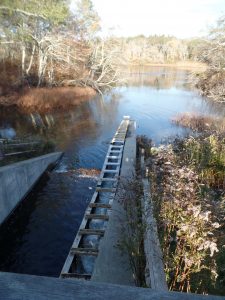 After the meeting, members of the River Herring Network joined Town of Sandwich staff for a tour of the Upper Shawme Pond fish ladder.

The group is still working to understand all the causes of the depletion of river herring. The moratorium on river herring harvest has been renewed every few years and is still in place in 2017.

The powerpoint presentations from the meeting are available on the River Herring Network website.

Video of the meeting can be accessed on the Pembroke Town News YouTube channel.

Voices from the Fisheries

NOAA’s Voices from the Fisheries Database is a central repository for consolidating, archiving, and disseminating oral history interviews related to commercial, recreational, and subsistence fishing in the United States and its territories. You can search the site in various ways and find interviews with members of the southeastern Massachusetts shellfish industry and local river herring wardens, who were interviewed by Woods Hole Sea Grant and Cape Cod Cooperative Extension marine resource specialist Abigail Archer.