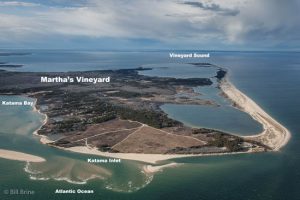 Boaters on Martha’s Vineyard know navigational maps of Katama Bay become obsolete very quickly. Why do the sands at the bottom of the Bay shift so much and so often? 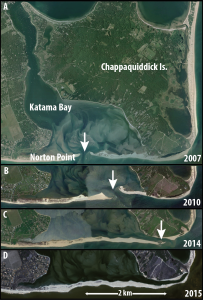 Katama Bay has two inlets. Water pours in from Vineyard Sound through Edgartown Channel, and from the Atlantic Ocean through Katama Inlet. The size and geometry of Katama Inlet changes frequently and has a big impact on the circulation in the Bay, as well as its bottom contours.

The size of Katama Inlet runs on a 10-15-year cycle, ranging from an opening a few kilometers wide to a very small narrow opening to completely closed. 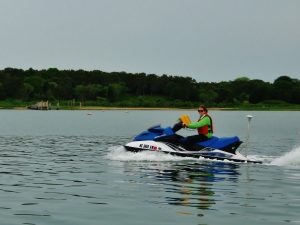 A team of researchers from WHOI has been charting changes in the size and depth of the inlet since before Hurricane Irene in 2011. Using a Jetski, the researchers can access very shallow waters in Katama Bay to collect their data. They use the data to create detailed maps of the Bay’s bathymetry or bottom contours. Changes between 2011 and 2013 include: migration of Katama Inlet over 1000 m (0.6 miles) to the east, and rotated to a nearly east-west orientation, elongated 1000 m, narrowed (150 m), and shoaled. And by April 2015, the inlet was closed. 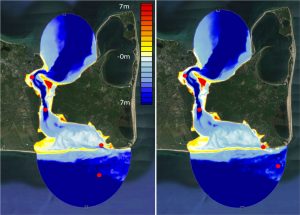 Until the research began, the maps of Katama Bay were woefully out of date. New maps will aid in navigation through the bay and harbor for any seagoing vessel.

Specific populations that will benefit from this research: