Woods Hole Sea Grant's outreach partners at the Cape Cod Cape Cod Cooperative Extension monitor water quality at four embayments around Cape Cod. These are Wellfleet Harbor, Barnstable Harbor, Pleasant Bay (Orleans), and Cotuit Bay and one on Boston's south shore at Duxbury Bay. These sites have been monitored for 10+ years to capture changes or trends in conditions, as well as the typical daily and seasonal trends specific to the body of water.  Live data from Wellfleet Harbor and Cotuit Bay are available every 15 minutes via a cellular modem. The archived data are available and specific requests beyond what is available can be made to the marine extension staff. 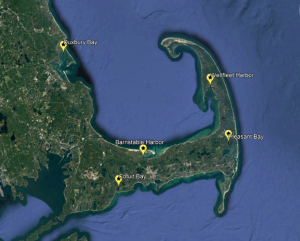 Process
The water quality conditions are monitored using sondes, which are capable of monitoring multiple parameters with a single device. Data is collected each year from approximately March to December, with measurements recorded and stored internally by the sondes every 15 minutes.

Every 4-6 weeks the sondes are retrieved for cleaning and re-calibration and are replaced with a fully calibrated instrument. At this time, data from the previously deployed sonde is uploaded directly to either a mobile device or a computer for storage and analysis. The Wellfleet Harbor and Cotuit Bay sites are equipped with solar-powered boxes which transmit readings hourly via a cellular modem.

Temperature: Temperature is often one of the most important factors influencing the growth of marine plants and animals. Many other water quality parameters and biological processes may also be influenced by temperature. There is also evidence that certain parasites and other potential pathogens to fish and shellfish vary in abundance according to physical properties like temperature and salinity. The temperature can be recorded in Fahrenheit (F) or Celsius (C) and converted using the following conversion equations: °F = (1.8 x °C) +32 and °C = (°F-32) x 0.555

Salinity (ppt = parts per thousand): The percentage of salts dissolved in full strength seawater is approximately 3.5% (or 35 ppt) and can vary slightly depending on location, depth and season. Factors that may dilute or lower salt concentrations include precipitation, river or storm water runoff, and ice melt. For instance, a lower level of salinity may occur after the influence of storm water runoff from a nearby storm drain or parking lot. Conversely, the salt concentration may be increased by evaporation or drought. Changes in salinity can stress marine organisms, as well as allow the opportunity for proliferation of different fouling or pathogenic organisms.

Depth (m): The depth is measured in meters (1 meter = 3.28 feet). It is important to know the depth at which the parameters are measured because of factors which may affect the parameter at various depths. There are several reasons to consider the depth when measuring water quality parameters. Examples: water temperature, chlorophyll, and turbidity decrease as the depth increases while salt concentrations generally increase with depth. Small variations in typical measurements could be the result of changing depth depending on the sonde location and placement or recent rainfall events.

Depth can also be used to proxy the height or amplitude of a tide at stations where the sonde is at a fixed level and does not rise and fall with the tide. The sondes used in our program are at fixed levels at all sites and allow for measurement of tidal flux but not to the degree of a tide station.

pH: In scientific terms pH stands for “potential hydrogen” which is an overall measure for the acid/alkaline balance. The pH level is measured on a scale from 0 to 14 where 0 is the highest acidic concentration and 14 is the most alkaline. The pH of a body of water or solution is determined by the hydrogen ion concentration activity and is expressed mathematically as pH = -log [H]. It is important for pH to remain at a balanced level for marine life as changes can affect physiological processes like the ability to utilize oxygen or the availability of calcium carbonate. The average pH of ocean surface water is approximately 8 but varies with environmental circumstances and location. Ocean acidification, or a decrease in pH, has become an increased concern over the past decades as increased atmospheric carbon dioxide is dissolved in the oceans, further warranting the long term observances of pH levels.

DO (or ODO): Dissolved oxygen (DO) is a measure of how much oxygen is available to marine life, and is a strong indication of the health of a water body. DO is measured as the amount of gaseous oxygen (O2) dissolved in water, and is measured by the sondes in both percentage saturation (%) and milligrams per liter (mg/L). Algae normally produce oxygen through respiration such that measured surface DO levels are often higher during daylight hours. A low DO level may indicate high levels of decaying algae and/or waste products. Low DO levels could also be the result of warmer water temperatures as the oxygen capacity of water is inversely correlated with water temperature, i.e. as water temperature increases the DO saturation level of the water decreases. Depending on the particular probe used, the DO will be expressed as DO or ODO (optical dissolved oxygen).

Chlorophyll (ug/L): Chlorophyll is a pigment that is responsible for photosynthesis in plants. Obtaining a chlorophyll concentration measurement is a way to estimate phytoplankton levels as chlorophyll is directly linked with the amount phytoplankton or algae suspended in the water. Phytoplankton consume available dissolved nutrients and carbon dioxide with the aid of sunlight during photosynthesis, which results in energy for the algae and oxygen which is released to the surrounding water. Understanding phytoplankton populations and their distributions can help understand the health of a water body, as the algae serve as a base food source for the ecosystem, but may also indicate conditions of eutrophication as nutrient levels start to overload the system. Higher levels of algae (chlorophyll concentration) can cloud the waters so that the bottom is shaded, hampering photosynthesis by submerged vegetation and decreasing dissolved oxygen available at the bottom. Also, as algae bloom in eutrophic conditions then settle and decay on the bottom, oxygen is used by bacteria consuming the decaying algae further removing available oxygen from the system.