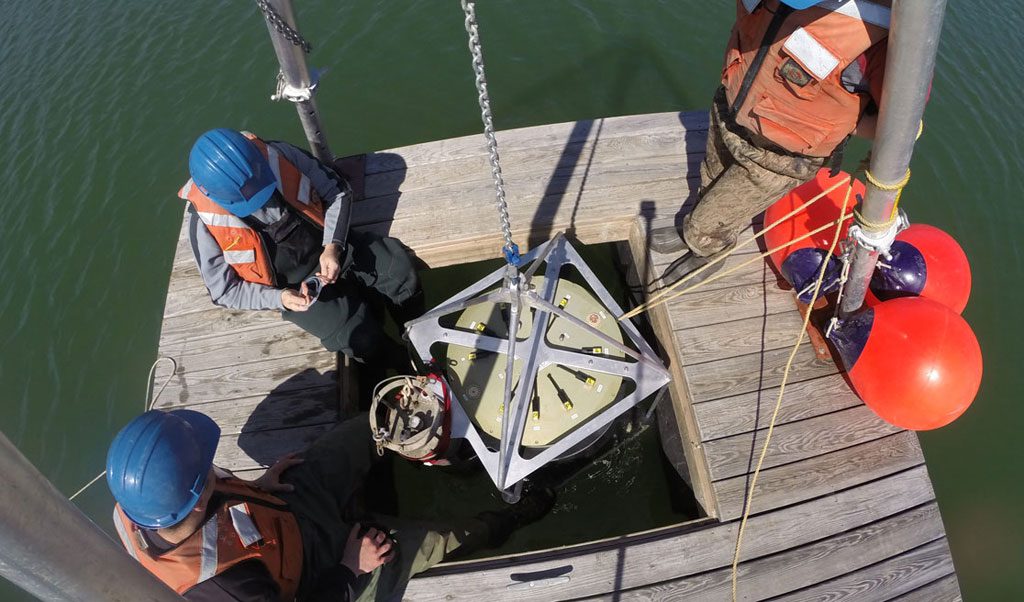 Oct. 17, 2018 — A new system using next-generation robotic sensors to monitor coastal waters for disease-causing microalgae has been funded by the NOAA Sea Grant Program as part of a national strategic investment in aquaculture.

The PhytO-ARM (Phytoplankton Observing for Automated Real-time Management), under development by a team led by Woods Hole Oceanographic Institution (WHOI) biologist Mike Brosnahan, will vastly improve our ability to detect harmful algal blooms (HABs) and the toxins they produce and provide aquaculturists, resource managers, and others detailed, real-time information about the bloom using a web-based, user-friendly dashboard.

“Clams and oysters grown in our coastal waters depend on phytoplankton as an important food source, yet some phytoplankton produce toxins, which accumulate in shellfish and pose a threat to humans and other animals that consume them,” says Brosnahan. “The information the system provides is very powerful and holds great potential for protecting human health and maximizing aquaculture operations.”

The project’s intent is to streamline the system so that it can be adapted for a range of uses, including by farmers to protect and maximize their shellfish yields; resource managers anticipating and responding to outbreaks to protect human health; and scientists working to better understand HAB dynamics in our changing environment.

In its most sophisticated form, the PhytO-ARM system couples two powerful sensors: the Imaging FlowCytobot (IFCB), which continuously records microscope images of phytoplankton and identifies them in real time; and a new high capacity Environmental Sample Processor (ESP), a “molecular lab in a can” that can positively identify species and toxins. “This system will provide rapid biotoxin measurements, alerting managers to the presence of biotoxins that cause severe, even fatal reactions in humans,” says Brosnahan.

A smaller scale version of the system couples the IFCB with a profiling conductivity-temperature-depth (CTD) probe to provide rich pictures of the distribution of phytoplankton around shellfish beds, which can inform and trigger management actions.

“Many harmful algal bloom species migrate vertically through the water column,” says Brosnahan. “By combining these sensors we can focus sampling on where cells are most abundant. Knowledge of the vertical distribution of cells may also enable farmers to tweak nursery operations to limit the exposure of juvenile animals to harmful algae.”

Another powerful aspect of the system is in monitoring not only the organisms that are known to have caused problems for many decades, but also for detecting species that are nascent problems for the aquaculture industry. New England has a well-established biotoxin problem with Paralytic Shellfish Poisoning caused by the phytoplankton Alexandrium. But the region is experiencing emergent problems with biotoxins from Pseudo-nitzschia and Dinophysis, both of which have caused shellfish bed closures in recent years. With the real-time data from PhytO-ARM sensors, resource managers can detect and monitor potentially toxic phytoplankton cells that are normally not part of their monitoring program.

Brosnahan has first-hand experience with this. In 2015, working with a proto-type PhytO-ARM system in Nauset Marsh on Cape Cod, Brosnahan and his team spotted some unusual cells. “We had just finished with our work with the Alexandrium bloom, and our IFCB was showing relatively high numbers of Dinophysis acuminata – a dinoflagellate that causes diarrhetic shellfish poisoning or DSP,” he says. “We were able to continue monitoring the development of the Dinophysis bloom throughout the summer and alerted the Massachusetts Department of Marine Fisheries and collaborators at FDA to a potential hazard, which ultimately resulted in the first closure of a shellfish bed in the northeast U.S. due to DSP.”

As part of the new Sea Grant project, Brosnahan will deploy configurations of the PhytO-ARM system in a number of locations in the Northeast and Florida:

Biologist Mike Brosnahan atop the PhytO-ARM raft in Nauset Marsh in Eastham, Mass. The raft supported an Imaging FlowCytobot (IFCB), which continuously records microscope images of phytoplankton, and was equipped with solar panels and a wireless Internet connection to run the IFCB, several other computers, and a winch-operated instrument to measure water temperature, salinity, chlorophyll concentration and light. Photo by Alexis Fischer, WHOI.

Brosnahan’s project will also take advantage of a complementary research project planned through the Woods Hole Center for Oceans and Human Health (WHCOHH) in Nauset Marsh on Cape Cod, as well as engage Sea Grant extension officers involved in aquaculture development within the states of Mass., RI, Maine, and Florida.

The benefits of the system for resource managers are clear. But Brosnahan says he hopes the system will be widely adopted by the shellfish aquaculture industry, who can use the information to guide their decisions on what gear to use, where to plant and when to harvest. The project’s goals exemplify core priorities for the Sea Grant program.

“Aquaculture represents about one-fifth of total U.S. fisheries production, and shellfish comprise about 75 percent of that activity,” says Matt Charette, director of the Woods Hole Sea Grant program, which is based at WHOI. “This new platform will provide exceptional insights into drivers of phytoplankton dynamics to increase the resiliency of aquaculture operations and enable advances in farm productivity and management.”

The project has a number of co-principal investigators. They are:

Based at WHOI, the Woods Hole Sea Grant program supports research and education, and a marine advisory program in concert with the Cape Cod Cooperative Extension, that encourage environmental stewardship, long-term economic development, and responsible use of the nation’s coastal and ocean resources. It is part of the National Sea Grant College Program of the National Oceanic and Atmospheric Administration, a network of 33 individual programs located in each of the coastal and Great Lakes states.