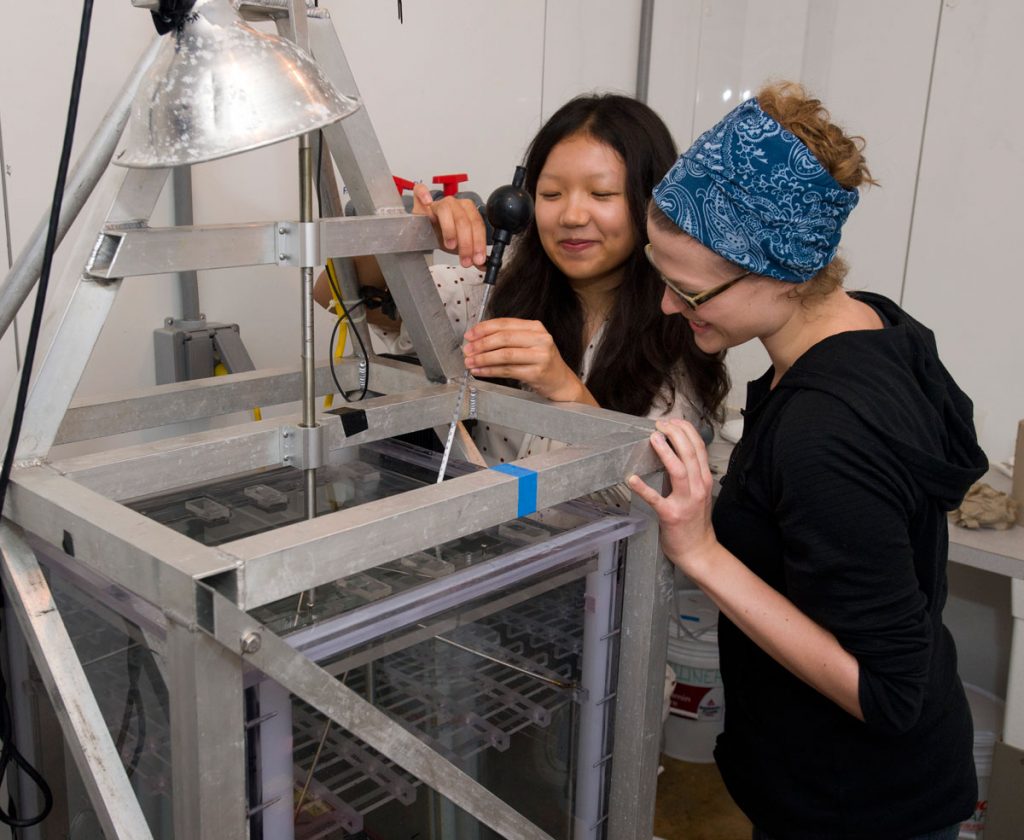 Oysters are a species of profound economic and ecological importance, as they represent a hundred million dollar per year aquaculture and fishing industry in the U.S. and are a foundational reef-building species providing refuge to other marine plants and animals, in addition to stabilizing shorelines against storm surges and filtering pollution out of coastal waters.

While adult oysters live in large reefs on the seafloor, tiny larval oysters swim freely in the water column and must somehow identify good places to settle and transition to their adult life stage, a tenuous time in their development in which most larvae die. Despite the fundamental importance of this life stage to maintaining healthy populations of oysters, scientists don’t fully understanding how larvae navigate the water column and find adult reefs.

With funding from Woods Hole Sea Grant Jeanette Wheeler, then a PhD student at Woods Hole Oceanographic Institution, and her collaborators investigated questions of larval oyster behavior in turbulence. Their research was published in May 2017 in the journal Marine Ecology Progress Series.

“Turbulence is the churning of water caused by waves breaking or wind blowing over the water’s surface, and is a constant companion to tiny larvae in the water column,” Wheeler said. “Moreover, it may provide them a useful signal to help them to settle; the flow of water over the rough surface of an oyster reef may signal to larvae in the water column that there is a good settlement habitat below.”

Wheeler’s research also examined how turbulence-behavioral interactions were impacted by additional environmental conditions larvae might encounter, such as the presence of light or chemical signals.

“Larvae prefer to settle during daylight hours with bright illumination in shallow water, and as such, we were interested in how both turbulence and light together would influence their swimming behavior,” she said.

Wheeler and her colleagues found that larvae exposed to light and a sufficiently long turbulence cue tended to ‘dive’ more often, a rapid and active decision to move downward in the water column. Such behavior would increase the likelihood that larvae would encounter seafloor settlement sites, and successfully transition to their adult stage.

In an aquaculture facility designed for rearing oyster larvae, the research findings might suggest that bright light and calibrated water flow could enhance survival of oysters leaving the larval stage. The research results could also be useful for the design of artificial oyster reefs in coastal communities, in an effort to make them self-sustaining by encouraging colonization by new larval oysters.

Wheeler is now a postdoc at ETH Zürich in Switzerland, investigating large-scale patterns in phytoplankton populations (such as harmful algal blooms) and how these patterns are driven by the interplay between the swimming behavior of phytoplankton cells and turbulence.

“Sea Grant has been a hugely impactful program for guiding my research focus over the past several years,” Wheeler said. “It has provided to my colleagues and myself a great opportunity to produce fundamental research in coastal marine ecology while working and communicating with local communities and industry stakeholders who rely on coastal ecosystem health, especially in the Cape Cod and Islands region.”

PHOTO: Pictured is the turbulence tank that we used to do the experiments described in the 2017 paper.  It is equipped with a high speed camera and near-infrared laser for taking high resolution measurements of both turbulent water flow and larval oyster swimming behavior.  On the left is my collaborator and co-author on the paper Elaine Luo (a 2013 Woods Hole Summer Student Fellow, currently a PhD student at the University of Hawaii) and I’m on the right.  Photo by Tom Kleindinst, Woods Hole Oceanographic Institution.