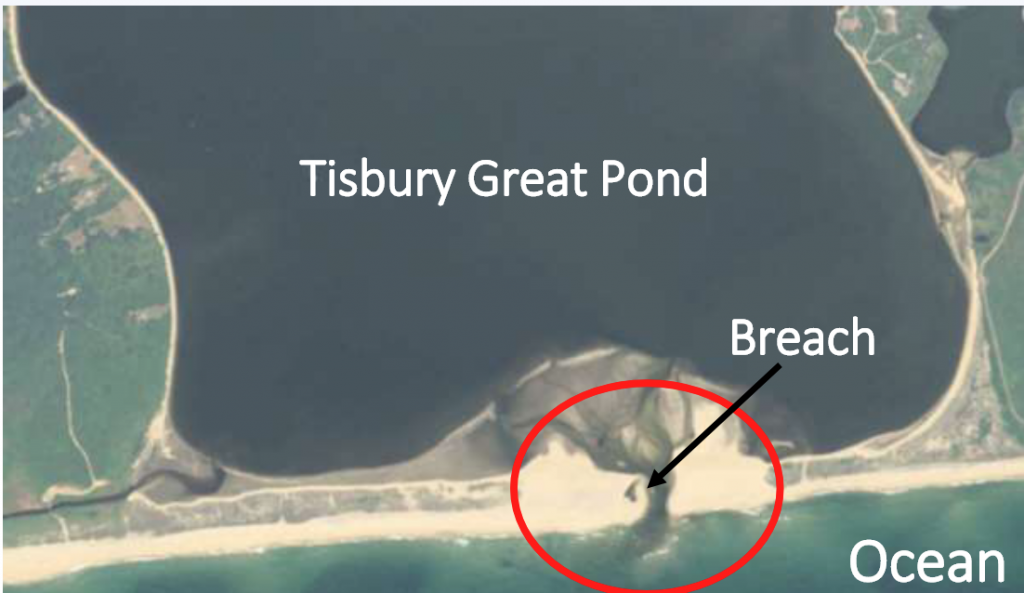 Many saltwater or brackish ponds are separated from the ocean by a narrow barrier beach. For hundreds of years, cuts — or breaches — have been made intentionally to manage water levels and nutrients in ponds along Massachusetts’ coastlines. Tisbury Great Pond on Martha’s Vineyard is one example of a coastal pond that benefits from machine-made breaches several times a year.

Breaches are made to drain the pond when rainfall, groundwater, overwash surges, or snowmelt create flooding hazards for the surrounding homes. The exchange of water with the ocean also improves the overall health of the ponds by reducing nitrogen levels and increasing salinity.  However, sometimes these management efforts are thwarted when natural processes, including waves, tides, and storm surge fill the opening with sand and close the breach before goals are reached. 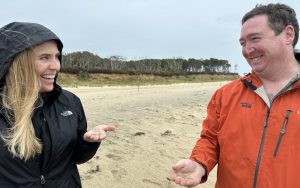 At last month’s Martha’s Vineyard Coastal Conference, Dr. Paige Hovenga described her work studying the intentional breaches of Tisbury Great Pond. A graduate of Oregon State University with a Ph.D. in civil engineering, Hovenga is currently a postdoc working with Steve Elgar and Britt Raubenheimer at WHOI, utilizing a state-of-the-art numerical model to understand the mechanisms of sediment transport and ultimately to improve the management of coastal ponds.

“For these ponds, from a management perspective, we want to understand the processes that lead to closure,” Hovenga said. “If, for example, they cut the breach wider, deeper, or at a particular angle relative to the shoreline, it could stay open longer.”

The scheduled breaching of coastal ponds provides the WHOI team with a unique opportunity for visual observations of the machine-made breach, its evolution, and eventual closure. At the same time, they are using measurements of water depths, waves, winds, and tides at Tisbury Great Pond and other ponds in the region – data Hovenga is using to model the dynamic environment.

Hovenga is using an existing numerical model, XBeach, to develop a model specific to the problems in this area based on the observational data set. Once developed Hovenga and her colleagues will test different environmental conditions related to water levels, waves, winds, and inlet cut geometries, testing which conditions lead to faster closures or leave the breach open longer.

By performing numerical simulations of currents, sediment transport, and morphological change, Hovenga will test different scenarios and will help develop breaching strategies that optimize exchange between coastal ponds and the ocean.

“We’re really interested in working with locals to hear what is important, what should be tested, and how we should move forward with this project,” Hovenga told the attendees at the Islands Conference.

Watch a video of nearby Edgartown Great Pond dredging