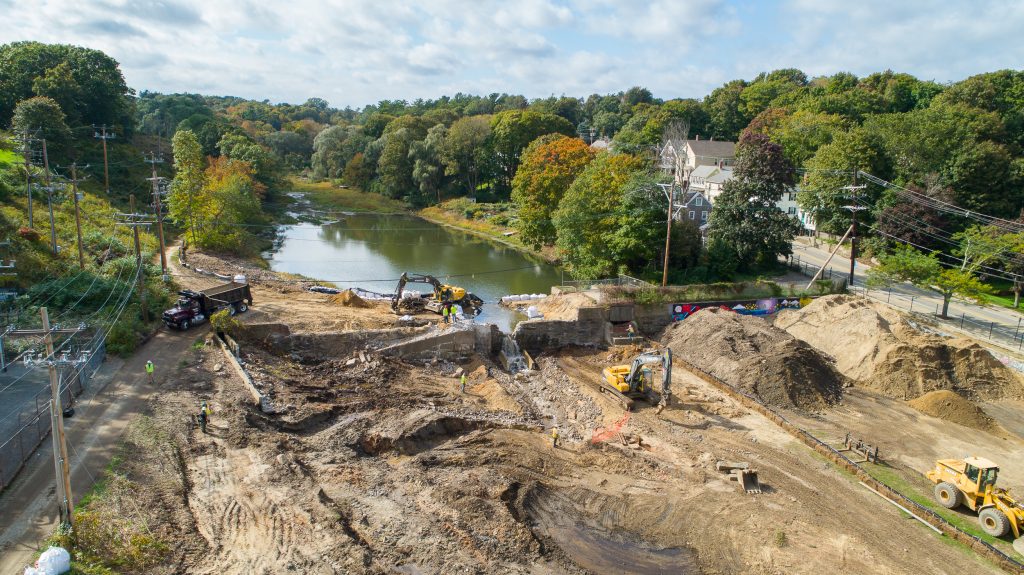 Just a stone’s throw from the Plymouth Rock where the Pilgrim’s first landed in 1620 is the mouth of Town Brook, a river that runs through the center of Plymouth and was once the source of fresh water and food for the Pilgrims. Chief among the fish from the river were herring, whose annual migration brought them up the river in the hundreds of thousands.

The Pilgrims used the river to power mills along its shores, and, over time, more than six dams were built on it, impeding the herrings' progress up the river to spawn in the spring and down it in late summer and early fall for their journey back to the ocean. Centuries later, the river herring population plummeted across the state, due in part to the dams along migration routes (as well as overfishing, poor water quality, and loss of habitat), and in 2005, Massachusetts declared a moratorium on fishing river herring.

The Town of Plymouth recognized the dams as a perpetrator, and in 2002 became the first town to proactively take down a dam to begin to restore the river's natural flow. Town Brook’s Billington St. dam was removed and replaced with a ‘rock ramp’ – a series of boulders placed strategically to stagger the elevation change and reduce water velocity. In 2014 & 2015 two more dams were removed and finally in April the Town Brook restoration was nearer to completion with the Holmes Dam removal and replacement with a set of rock riffles.

This spring, Marine Resource Specialist Abigail Archer has worked with the Town of Plymouth and US Fish & Wildlife Service, and NOAA Office of Habitat Restoration to track the movements of river herring through the newly restored, Holmes Dam section of river. 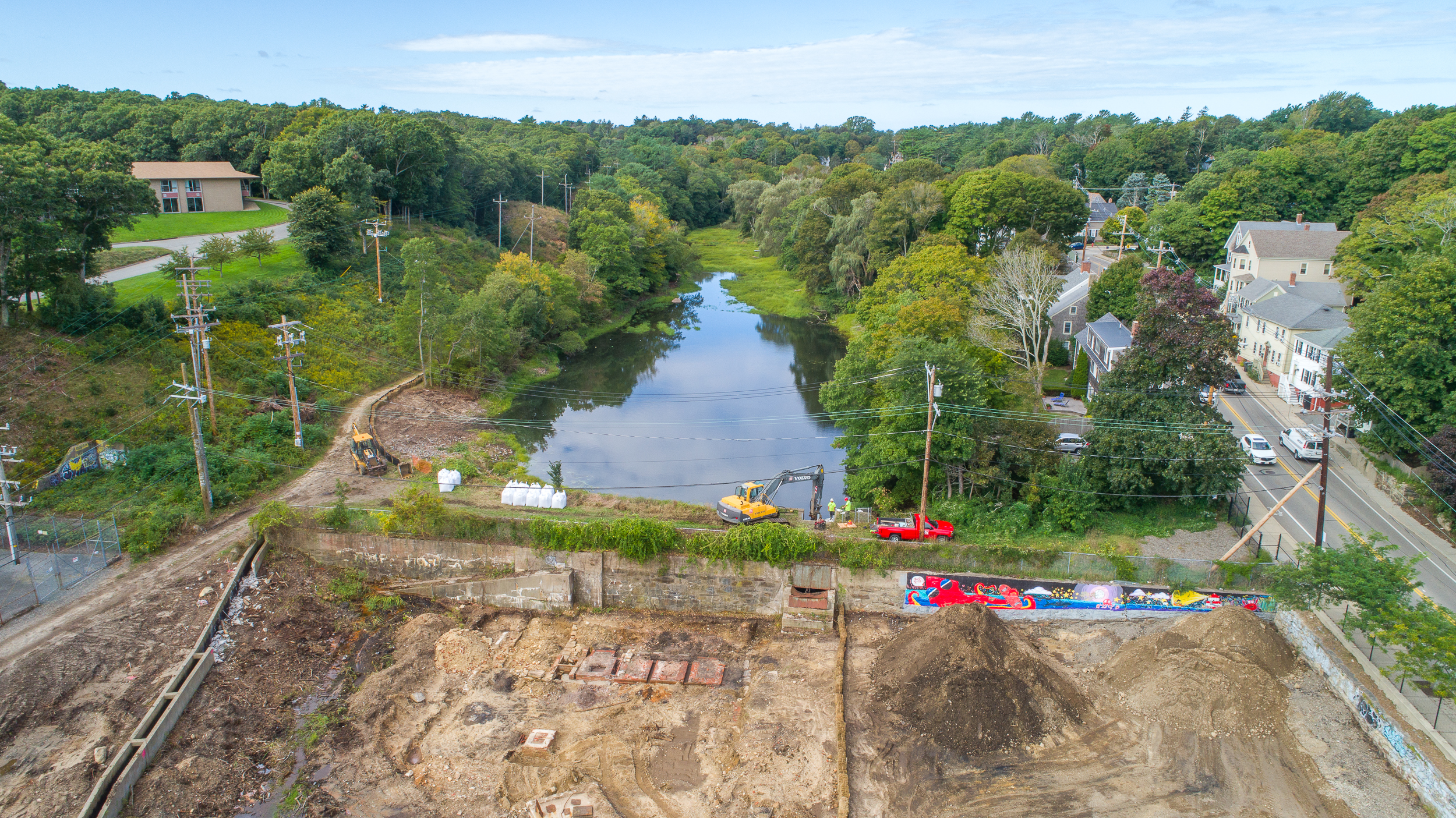 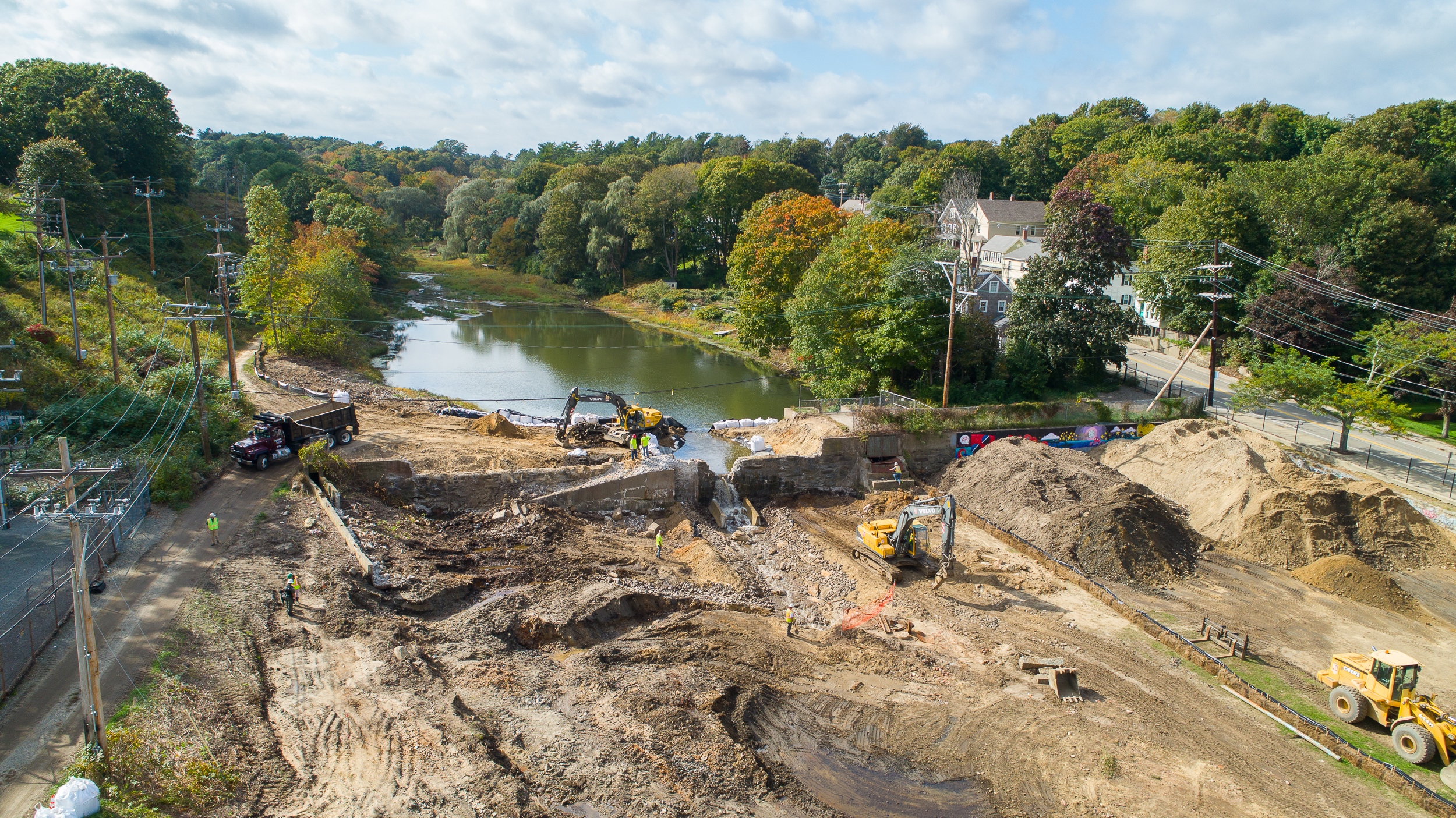 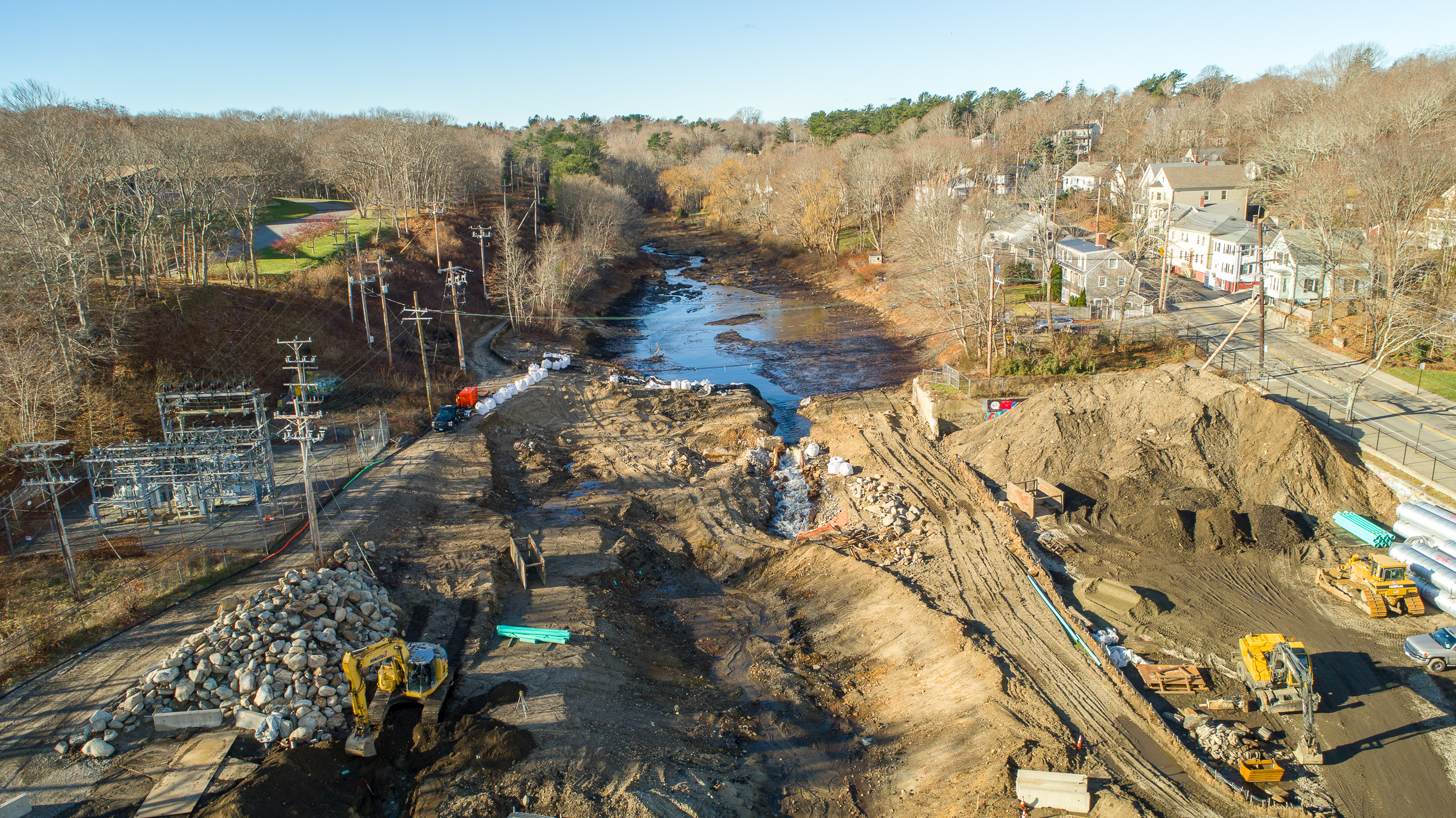 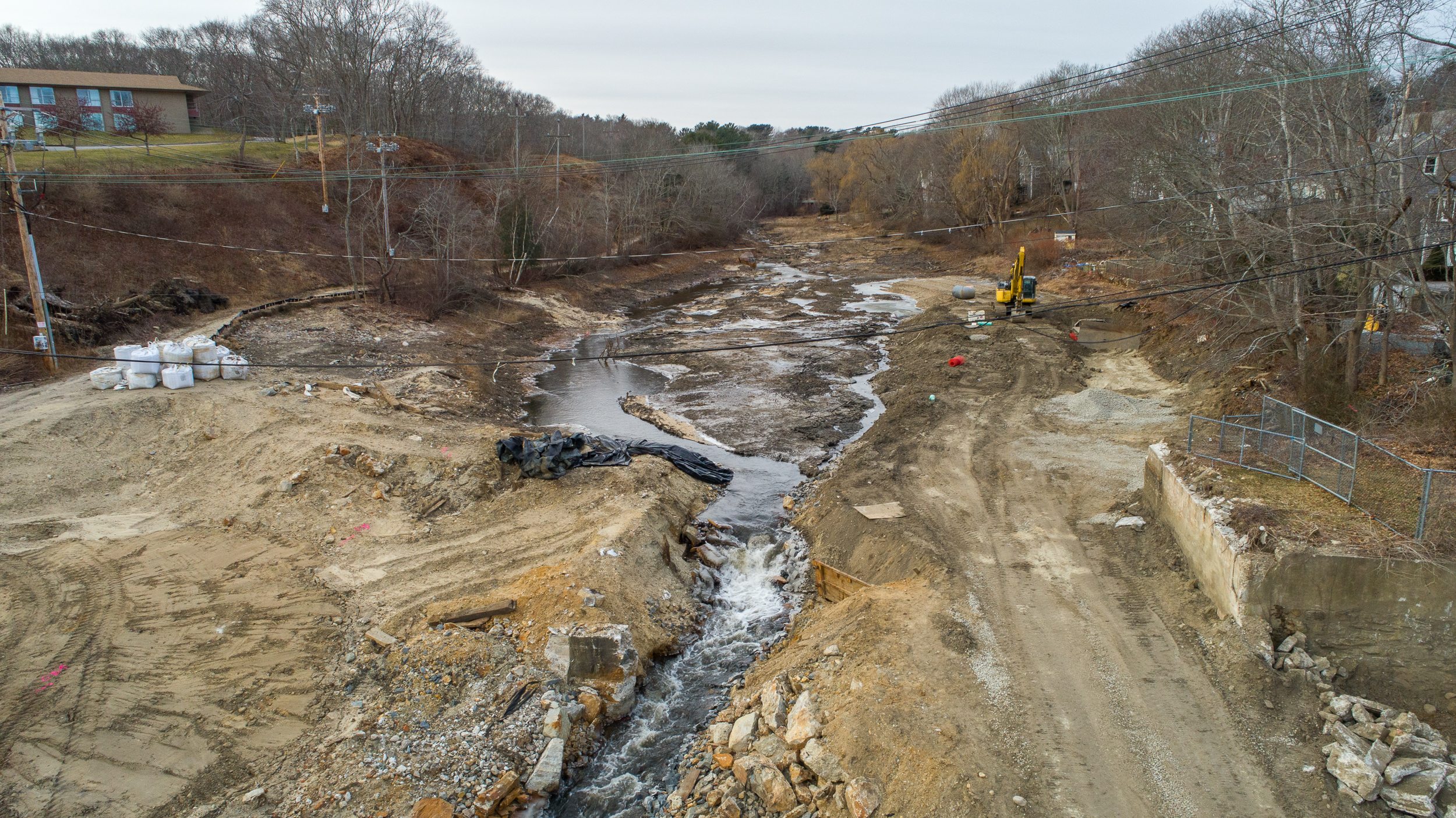 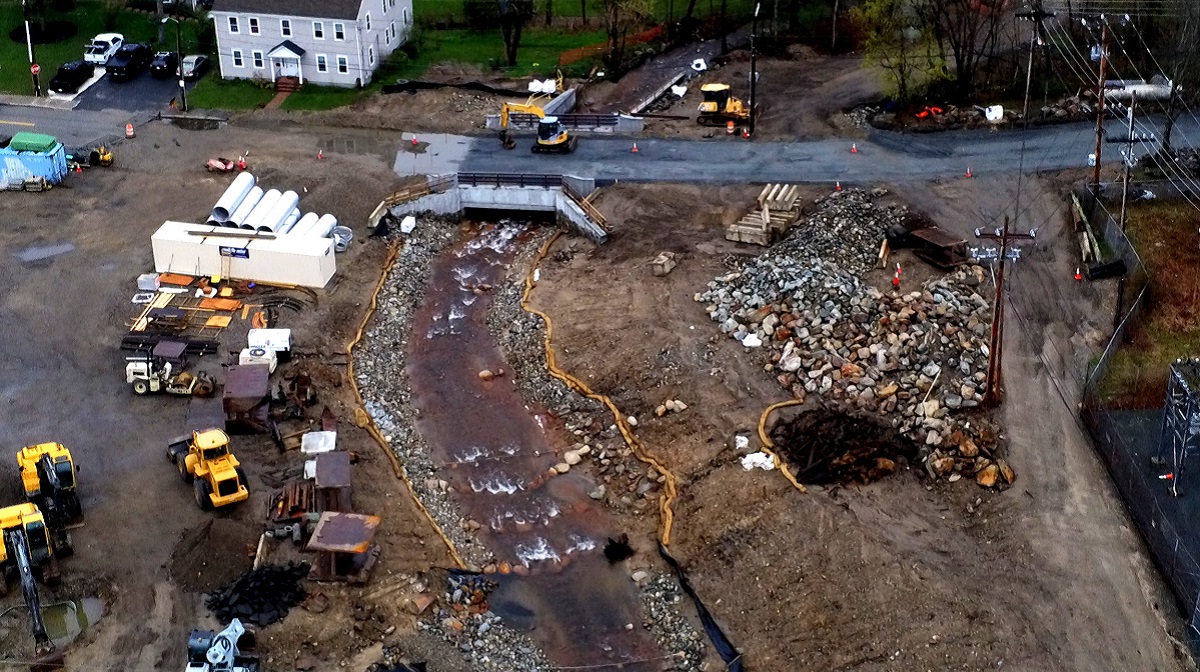 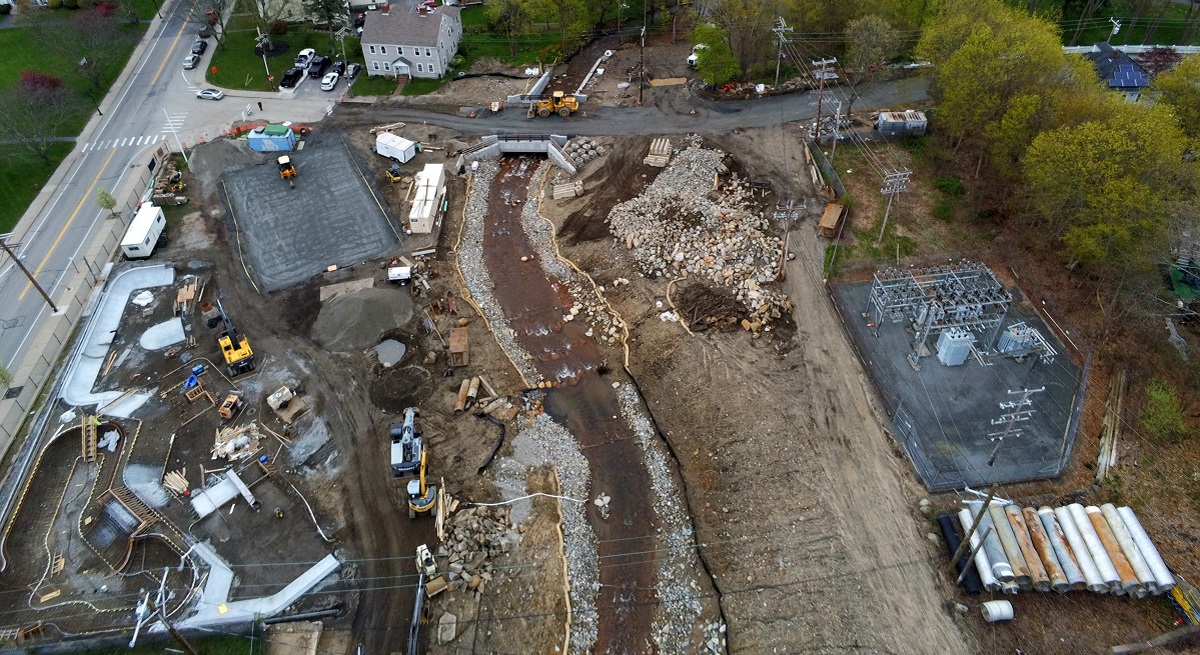 The goal of all of this work was and is to improve the conditions for migratory river herring (Alosa pseudonaregus & Alosa aestivalis) to swim upstream to their spawning grounds.  The theory is that more fish will swim through a section of restored river than would swim through the old fish ladders, and that they will probably swim faster through these stretches of river now that the dams are gone. But how do you actually test that?

Back in 2006 Marine Resource Specialist Abigail Archer worked with the NOAA Office of Habitat Restoration, the Town of Plymouth, and Dr. Alex Haro, head of the Fish Passage Lab at the USGS Conte Anadromous Fish Laboratory to use a technology called Passive Integrated Transponder (PIT) telemetry to time the herring swimming through the reconstructed Billington St rock ramp. The work was part of Archer’s Master’s thesis at UMass Amherst. The team determined that 94 percent of fish that tried to pass did, and most made it through in under 22 minutes. 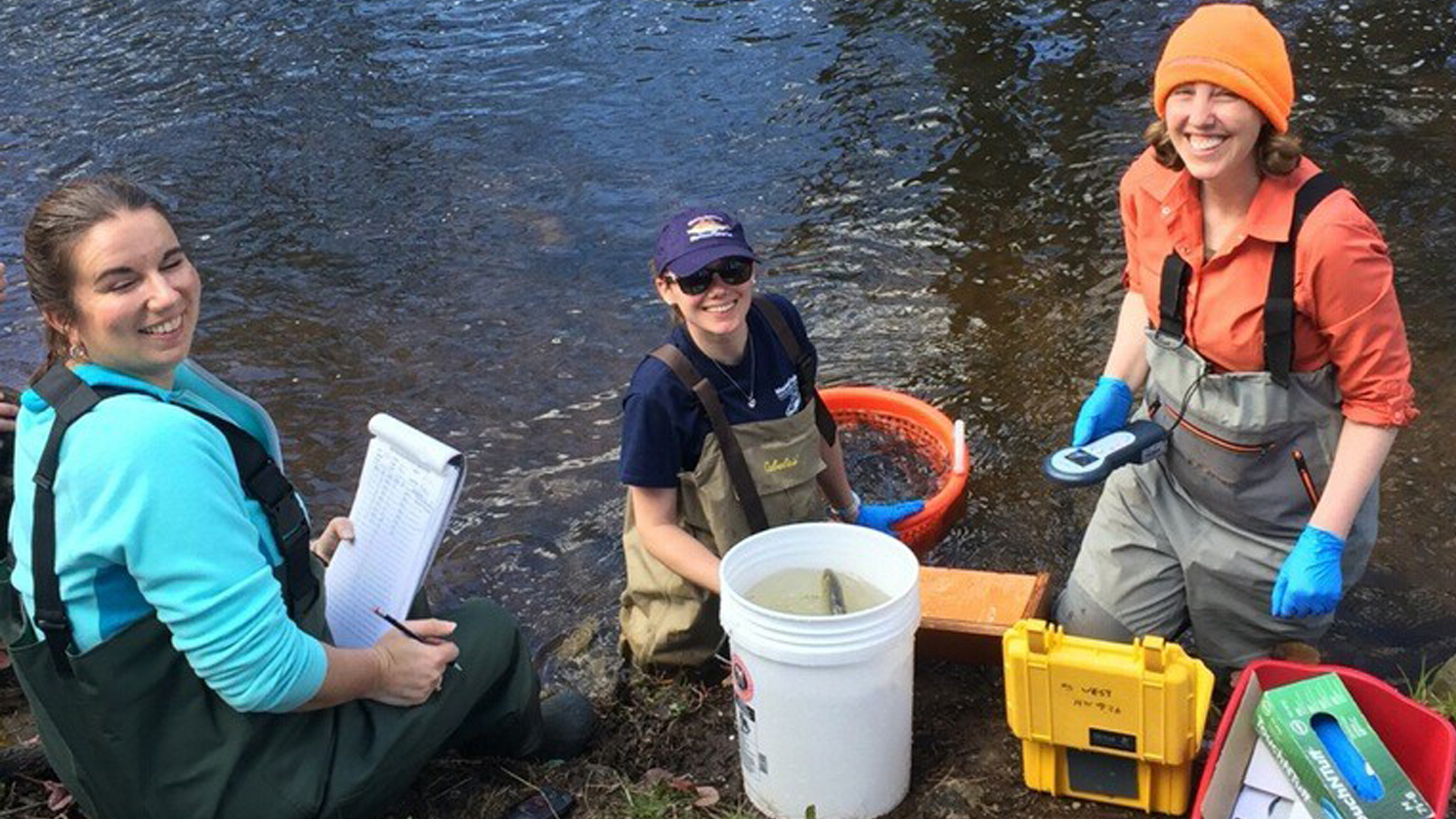 But the real question is whether the reconstructed passages increase the number of herring able to make it to the spawning grounds. To find out, the Town of Plymouth asked Archer to evaluate passage of river herring through the Holmes Dam in 2018, and to measure that against the numbers of herring able to make the passage after the dam was removed in 2019.  In spring 2018 working with Plymouth staff and many volunteers, Archer set up antennas along the three fish ladders that allowed river herring to swim over the Holmes Dam.  Five hundred river herring were PIT tagged to determine what percentage could make it past the dam, and how long it took them. Only 24 percent of the fish that tried to swim upstream were able to make it through those fish ladders.

Over the winter of 2018 and 2019 the fish ladders at Holmes dam were removed and the portion of the dam blocking the river was demolished (see photos). In spring of 2019 Abigail worked with her team to set up antennas at the same locations and PIT tagged another 500 fish to see if their performance has improved. Also - they were pleasantly surprised to see that 74 of the fish they tagged in 2018 returned to the river in 2019! Data analysis has just begun and results will be shared in future articles.