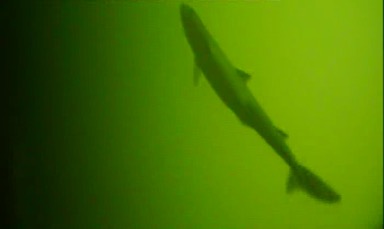 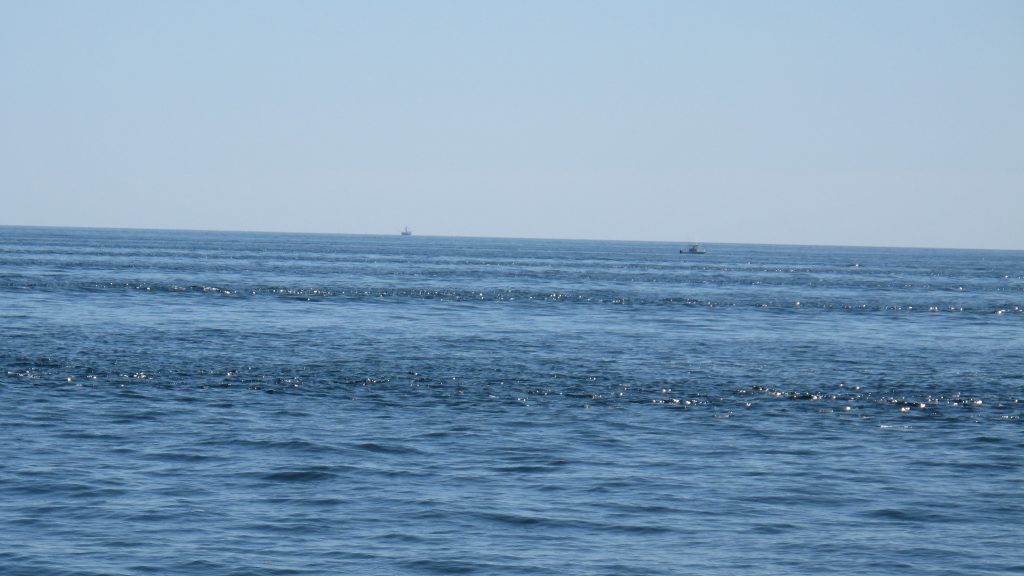 Bands of smooth water alternated with bands of rough water can indicate the presence of an internal wave.

A new study provides insight into the behavior of small sharks when encountering a common ocean phenomenon known as internal waves. These waves play powerful and still unknown roles in the exchange of heat, energy, water properties and nutrients throughout the ocean, and can change the vertical distribution of animals in the water column.

The study, published in the journal Limnology and Oceanography, found that sharks can respond actively to large internal waves, diving deeper and encountering colder temperatures, which has an energetic cost. The research is important to the conservation and management of Squalus acanthias, or dogfish, a once abundant but now globally declining species of shark. 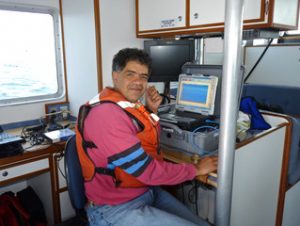 “This is one of the first studies to describe how sharks or other large organisms respond to an internal wave,” said lead author Jesús Pineda, a benthic ecologist with Woods Hole Oceanographic Institution (WHOI) on Cape Cod. “These sharks are a resource for New England fishermen, but worldwide it is a threatened species. There are many things we don’t understand about their physiology or their distribution. This study helps fill in a piece of the puzzle.”

Internal waves are ubiquitous in the coastal ocean but their influence on a region’s ecosystem is not well understood.  Internal waves are like surface waves: they occur at the interface of two fluids with different densities –in the case of surface waves the fluids are air and water. However, internal waves ride the interface of two water layers with different densities and, as the name suggests, within the body of the fluid. They are more prevalent in the late spring and summer when surface waters warm, creating stratified temperature layers or a “thermocline.” Internal waves occur everywhere in the coastal ocean but not in a completely predictable manner, making it challenging to study animals’ responses to them.

“It’s easy to measure internal waves with an echosounder, but it’s not easy to have a situation where you can measure the shark distribution and the internal waves at the same time,” says Pineda.

One of the coastal locations where scientists know internal waves are generated happens to be in Pineda’s backyard—Stellwagen Bank, a large, underwater plateau in Massachusetts Bay. In 2008, co-author Karl Helfrich, a physical oceanographer at WHOI, and Jose da Silva, a visiting scientist at WHOI, used satellite images to discover internal waves propagating from Race Point Channel at the tip of Cape Cod. Some of those waves interacted with the southwestern tip of Stellwagen Bank.

“We know they generate with the tide, so we can reasonably predict when they are going to arrive off Stellwagen Bank,” Pineda says. “The wave is going in response to the tide, but you also you need to have a topographic feature like the Bank for them to generate.”

In July of 2010 and 2011, Pineda and his colleagues steamed to Stellwagen Bank, timing their expedition to their calculations of when the internal waves would arrive. They watched the surface of the water for telltale bands of smooth water alternated with bands of rough water, which indicated the presence of an internal waves. The team then used echosounders, current meters and a line of temperature loggers to record environmental data and confirm the presence of the waves.

From previous experience, the team knew the echosounder would also show them the distinct acoustic “traces” of small sharks in the water – characteristic ‘rectangular’ shapes on the echosounder, which were verified by lowering real-time video cameras into the water. 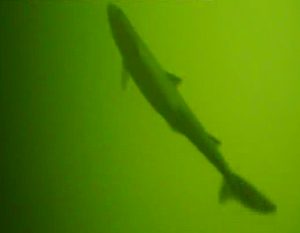 “You can put a tag on a shark, but you only get data from a single shark. Here, we were looking at hundreds and in one case thousands of shark traces—signals from sharks picked up in the echosounder,” says Pineda.

During their expeditions, they observed two internal wave events—on July 23, 2010, and July 1, 2011, off Stellwagen Bank—while also detecting aggregations of dogfish, capturing 3,240 and 527 shark traces during the respective events.

The individual sharks moved up and down in response to the currents associated with the sinking and rising of the wave—essentially passively riding the wave. However, in response to very large internal waves, the sharks appeared to actively swim down and out of the wave into deeper water, at times exposing them to temperatures as cold as 6.2°C—approximately 4°C (7°F) colder than the upper layer.

“Swimming in colder water has implications for the shark’s metabolism,” says Pineda. He also wonders how the sharks’ presence at the bottom influences the benthic community—the animals living at the bottom may suddenly be at a disadvantage.

The scientists don’t yet know what factors caused sharks to respond to the wave, but one hypothesis is that by swimming down the sharks might escape the horizontal shear created by the wave’s rapid upward movement.

“We think in this event, the waves cause current shear,” says Pineda. “Some are going in one direction above the thermocline and another is going in the other direction. It’s very dramatic. When you have this kind of situation, you have a very turbulent area in between, so what we speculate is that they are avoiding these very high turbulent areas.”

Among the researchers’ next steps are to find out why are the sharks responding in this way and what the consequences are for the physiology of the animal.

» Read the paper in Limnology & Oceanography