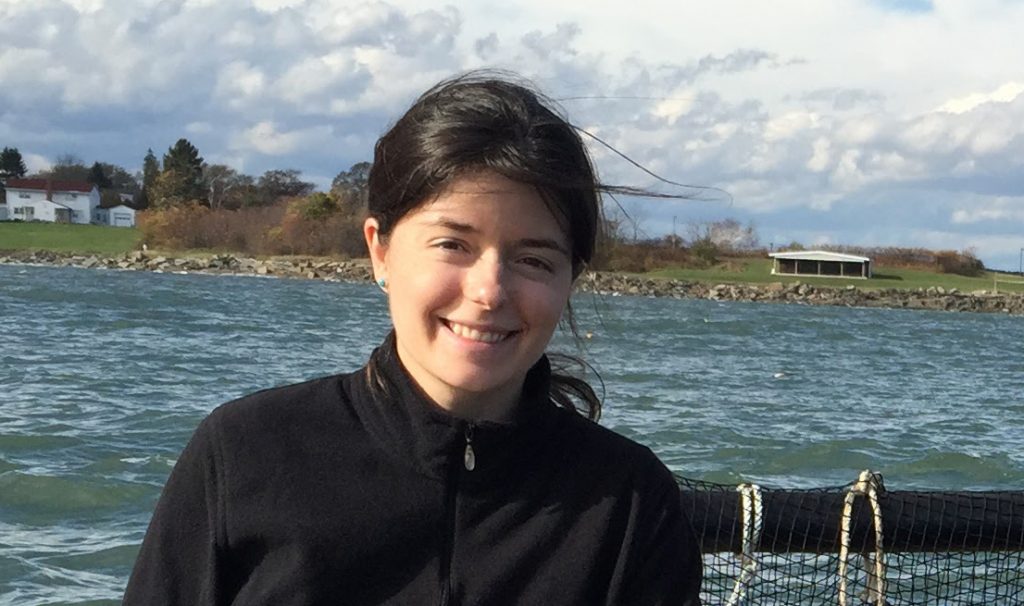 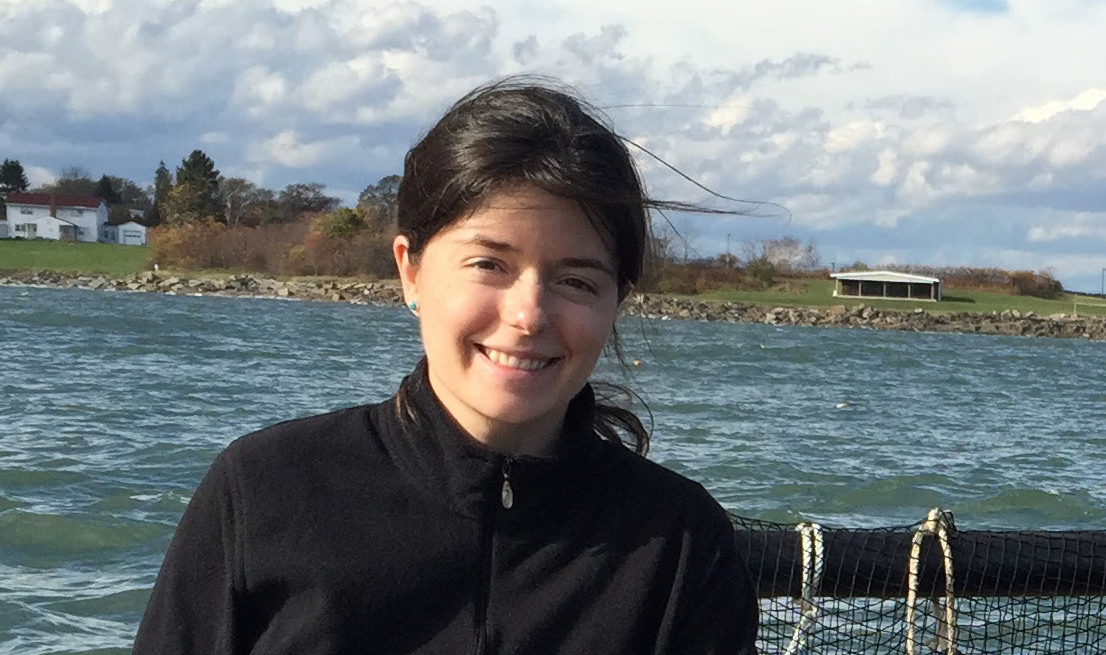 Amalia Aruda Almada has long had an interest in the connection between ocean science and public health. As an undergraduate at Georgetown University, Almada had read about the oceanographer and microbiologist Rita Colwell, who was the first scientist to show that freshwater copepods—barely visible shrimp-like animals—played host to cholera bacteria and were associated with cholera outbreaks. Inspired by the Colwell’s work in Bangladesh to reduce the spread of cholera, Almada came to WHOI to study copepods with biologist Ann Tarrant, as an undergrad research fellow over two summers and then as a PhD student in the MIT-WHOI Joint Program, looking at many different types of bacteria that live on copepods.  Almada was awarded a Knauss Marine Policy Fellowship (2015-2016) at NOAA’s National Ocean Service after graduating from the Joint Program. This summer we chatted with her about her Knauss experience, her current work and where she’s headed.

“It was a really interesting jump for me to go from my work with bacteria and copepods to the Knauss Fellowship. I wanted to better understand the translation of science -- understanding how policymaking happens. As an undergrad at Georgetown I went in thinking I wanted to do basic research. But I took a lot of policy classes and internships at the Ecological Society of America, and I think that’s where I got the bug – I found policy to be incredibly interesting and relevant. Then as a grad student I was upfront that I wanted to be trained as a scientist – but I didn’t think I want to be in the lab forever. I set out with the perspective that being trained as a scientist would improve my ability to make good policy.

As a Knauss fellow I was in D.C. with the National Ocean Service (NOS) and their Policy and Constituent Affairs Division (PCAD). It’s an exciting place to sit because that’s the headquarters office for the NOS, and they work with all the program offices within the NOS. Their role is to support the Assistant Administrator of the NOS, so you’re seeing all the requests that are coming from Congress, and gathering information from the NOS program offices about what was happening in the organization, engaging in programmatic work and understanding the high-level framing of all those issues. 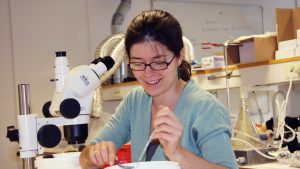 Amalia Aruda Almada at work in the Tarrant lab at WHOI.

I loved working for NOAA. I felt like the public servant mentality really resonated with me. I really felt like I was making a difference. I was part of NOAA’s Arctic team – and I supported the senior Arctic advisor and his team. At NOAA, the Arctic team comes from all the different NOAA Line Offices -- the National Weather Service, National Ocean Service and other branches – they all come together on a centralized Arctic team. So I helped to manage that group. It was an exciting time because Obama was featuring the Arctic as an example of climate change happening in real-time. Obama held his big Arctic Summit in 2016 which I unfortunately didn’t get to go to, but I helped write remarks that he gave. I was also working on the national ocean plan which was coming to a head at the time I was there.

One thing that was frustrating to me about NOAA at the time, where I was, was that there wasn’t an explicit focus on human health connections to the work we were doing. Which to me is extremely relevant. I realized as a Knauss fellow that was something where I was looking to make more of a connection -- between human health and our environment.

I also realized someday I’d love to go back to working for NOAA. I looked around and asked myself what were the skills that made leaders there successful. People management and program management were the elements I saw. Being able to have clear vision for your programs and actually knowing how to execute that, and understanding the various roles people play to get that to fruition. I wanted to find a job in program management that would give me that set of skills with the hopes of using that for whatever was next.

Almada (third from left) with her cohort of Knauss Fellows.

My work over the last three-and-a-half years following my fellowship has been incredibly rewarding. I work at Harvard as the senior program manager for a group called the Planetary Health Alliance. This is a consortium of over 150 institutions from over 35 countries focused on advancing planetary health. Planetary health is a new term for an emerging field focused on understanding and addressing the human health impacts of global environmental change, including changes like global air pollution, land use change, and biodiversity loss.

As for what’s next -- I’m excited to get back into oceans work. I’m increasingly interested in sustainable intensification of aquaculture. I see that as an important intersection of oceans, human health, environmental change. I’m interested in the technologies that will help us do aquaculture well, the governance implications of how you actually regulate and monitor and have sustainable co-occurrence of different activities happening in the ocean. There are all kinds of exciting things happening in this arena – and there are a lot of kinks to be worked out. There are research, governance, and policy needs emerging around the intensification of aquaculture, so it’s a really interesting area that I’m excited to engage in."