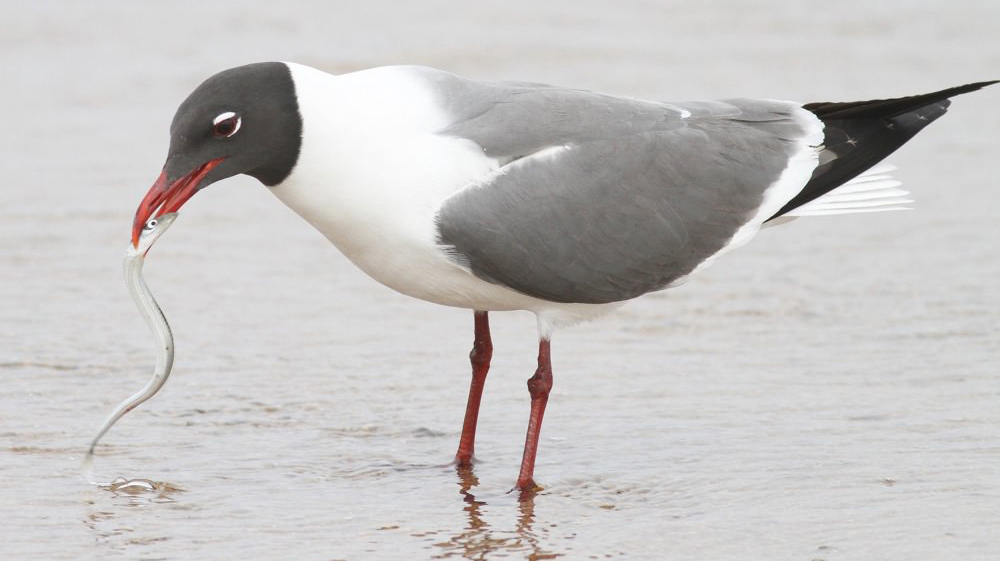 In the Gulf of Maine, there’s a little eel-like fish not much bigger than a large pencil, that buries itself in the sand in the summer and swims up and down in the water column in the spring and fall. It’s called a sand lance and it’s incredibly important to the ecosystem of the Gulf of Maine. If you like whale watching, this little fish is the biggest reason you might or might not see a whale: Humpback whales love to eat sand lance, as do cod and tuna and many seabirds. So when sand lance are plentiful, so too tend to be the whales, fish and birds that prey on them.

Humpback whales produce bubbles, which force the sand lance to the surface. Photo by Melissa Patrician/WHOI

Despite the importance of the northern sand lance to this region, scientists are in the earliest stages of understanding their life cycle and the dramatic changes in their abundance from year to year. But research by a group of biologists funded by Woods Hole Sea Grant is making strides filling in gaps in our knowledge of this prey species that plays such an important ecosystem-level role in our region.

“If people are worried about cod and whales and birds and declines in fished species, they should care about sand lance,” says Joel Llopiz, a biologist at Woods Hole Oceanographic Institution (WHOI), whose collaborators at Stellwagen Bank National Marine Sanctuary have seen a direct correlation between sand lance abundance and the presence of other species. “The whales show up if the sand lance are there, and if they’re not, they don’t. Same with cod and blue fin tuna.” 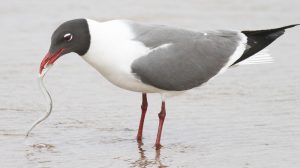 Sand lance are preferred by sea birds because they slide down the bird’s throat without getting caught like other fish. Photo by Peter Flood/Stellwagen Bank NMS

One reason so little is known about the northern sand lance is because there is no fishery for them. Yet their role in the food web of our region is critical.

Justin Suca is a graduate student working in Llopiz’s lab studying the northern sand lance—its habitat, its life cycle, its feeding patterns. In reviewing the scientific literature about them, Suca has found “you have to question everything” because there are a lot of assumptions about the northern sand lance based research on European species, and they don’t appear to be holding up based on the samples collected by the Llopiz lab.

“People thought northern sand lance don’t feed from January through March—that’s not true,” says Suca. “Practically every fish I dissect in February and March have full stomachs. They’re clearly feeding, so it doesn’t appear these fish are undergoing a winter hibernation, as people suggested in the literature. We're also showing they’re not feeding a whole lot in the late summer and fall. They’re essentially residing in the sediment when it gets really warm and feeding conditions are poor, while they develop gonads.  Again, probably that’s not generally thought of when we think of the species in Europe.”

The lab’s research focuses in part on why the numbers of sand lance in the region can vary so greatly.  Llopiz says their studies are helped by rich decades-long data sets in this region mostly collected by NOAA.  A National Marine Fisheries Service survey of sand lance abundance from the late 1960s through 2014 found great abundance in the late 1970s and into the ‘80s, a drop-off in the 1990s, and some resurgence of sand lance in the mid-2000s. Using these data, Suca found a correlation between the quality and abundance of sand lance’s chief food source – a small, fatty crustacean about twice the size of a grain of sugar called a copepod, specifically Calanus finarchicus—and the abundance of sand lance. Essentially, if there is plenty of fatty food for sand lance to eat, there will be more, or higher quality, spawning in the fall, and more sand lance in the following years. “If there’s high-quality prey as adults, they can make more (or better) eggs and therefore more larvae and so on,” says Suca. 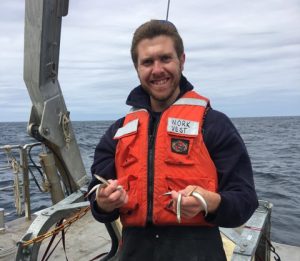 “We call that a ‘bottom-up’ impact on sand lance through the availability of copepods,” Llopiz says. Further, by correlating databases on sand lance abundance against the abundance of Atlantic herring and mackerel that prey on larval and juvenile sand lance, “Justin [Suca] is finding a ‘top-down’ impact on sand lance," Llopiz continues. "That balance of top-down versus bottom-up impacts on fish population dynamics is hard to show—because the needed data are rarely available.”

Suca sums it up, explaining, “A really good sand lance year is one in which the parents had a lot of high-quality prey, which at this point for the most part we’re assuming is Calanus, and when there are low numbers the next year of Atlantic herring and Atlantic mackerel that are eating the larvae. That’s a good sand lance situation.”

Beyond prey and predators, the research team found an additional factor affecting the abundance of sand lance in our region—winter water temperature. They found that there are fewer sand lance when more warm, Gulf Stream influenced slope water enters the Gulf of Maine in the winter than cooler water from the Labrador Current. During the late fall and winter, the adult sand lance have the lowest reserves of fat and the warmer water increases their metabolism at a time when there is little high-quality food around, making it difficult to survive.

Given these findings, recently observed increases in warm slope water entering the Gulf of Maine could make it more challenging for this vital part of the ecosystem.

Suca, who is approaching the final year of his PhD program with the MIT-WHOI Joint Program in Oceanography, says the sand lance work has been interesting and fun.  “I love classic fisheries oceanography—how their prey might drive the distribution of sand lance and also how currents and other forms of physics might drive where sand lance are, how much they grow, and where their larvae ultimately go. I find that aspect of science really fun. And sand lance are a really cool species.”

The team’s findings can provide insights for NOAA’s ecosystem-based approach to managing fisheries, and make understanding this little fish even more important.

“Ecosystem management is the key thing,” says Llopiz. “If things didn’t eat them, sand lance might not be very interesting. It’s discovering something cool about something so important that’s really interesting.”