Though it has been 30 years since the last major hurricane struck the Massachusetts coast, hurricanes can be devastating and they can happen here!

Be smart and prepare yourself, your family and your home to minimize losses from a hurricane.

Preparing for a Hurricane in New England

*From Homeowner's Handbook to Prepare for Coastal Hazards

Myth 1: “I survived Hurricanes Bob, Irene and Sandy, so I am sufficiently prepared.”

Many people have the impression that if they survived past hurricanes and nor’easters, they do not need to prepare any more than they did previously. Although previous storms resulted in widespread damage along the East Coast, their impacts to Massachusetts could have been much more severe. Had those storms tracked slightly differently, made landfall at different locations along the coastline, occurred during high tide, or been more powerful (when they reached Massachusetts), significantly greater effects would have been experienced in Massachusetts, including higher winds, more structural damage to buildings and severe flooding.

When a coastal storm or flood event occurs, the damage can be devastating. In 1991, Hurricane Bob was responsible for six deaths and caused over $1.5 billion in damage, with most of that monetary loss occurring in Massachusetts.

In fact, the vast majority of damage or destruction during recent tropical systems was caused by inland flooding associated with extreme rainfall (e.g., Irene in 2011). Additionally, hurricane-force winds can extend over 100 miles from the center of the storm, which can cause widespread damage in all of Massachusetts, not just the coastal counties. Therefore, all homeowners should prepare—not just those who live along the coast.

Myth 4: “Even if I prepare for a storm, my home won’t be stormproof.”

Even though someone may wear a seat belt, shoulder belt, and have an airbag, there is no guarantee that person won’t be injured in a major auto accident. Yet most people recognize the importance of these safety devices in reducing risk, and use them. Likewise, the measures discussed in this handbook could significantly reduce risk, although there are no guarantees there will be no damage.

Myth 5: “If my home or property is damaged by a natural hazard event, government programs will provide assistance.”

After major disasters, many homeowners find that the government is highly unlikely to repair their uninsured damaged houses or even provide adequate compensation for property damage. Government compensation evaluations are conducted after a disaster strikes and are based on the amount of damage that occurs on a county-wide basis. It is up to you to plan properly, strengthen your house, and have the appropriate financial protections in place such as insurance. After a natural disaster occurs, the government may also be overwhelmed by the number of people in need and help may not arrive quickly.

Myth 6: “My house survived Hurricanes Bob and Sandy, so I do not need to retrofit for hurricanes.”

When another massive natural disaster occurs, the resulting damage could be much greater. Bob drove a surge of 10 to 15 feet into Buzzards Bay and caused over $680 million in damage in Massachusetts, however it was only a category 2 hurricane. A fast-moving category 3 hurricane could produce a surge of 20 to 25 feet into Buzzards Bay. While Sandy caused tremendous damage in many Mid-Atlantic states (and significant damage in Massachusetts), Sandy was only a Tropical Storm in Massachusetts — that is, coastal flood levels were less than 100-year levels, and wind speeds were well below coastal building code design-level wind speeds. Homeowners in coastal Massachusetts should consider retrofits that provide window protection and a continuous load-path connection, which will help protect homes against both hurricanes and nor’easters.

Things to remember during an emergency Expand
Know Your Hurricane Evacuation Zone! Expand

Zone A & B – These zones include areas that, depending on predicted inundation, may flood first from storm surge during a tropical storm or hurricane. Areas in Zone A would flood before areas in Zone B.

Zone C – The cities of Boston and Cambridge have designated a third zone, Zone C, which may flood depending on the track and intensity of the storm.

Use the map on this website to determine what zone you are in.

Your at-home supplies should include at least the following:

Your evacuation plan should consider yourself, the members of your family, those with special health needs for whom you take responsibility (like the disabled or elderly), and your pets. Practice evacuation procedures with your family through yearly drills.When you put your evacuation plan together, here are some things to consider:

Select two family meeting locations where your family can reunite after a disaster: One close to home and a second farther away, in case you are asked to evacuate or can’t return to the area.

Parents should be familiar with the evacuation plans that are in place for their child’s school, specifically, where the students will be held and for how long during each type of natural hazard. You should not have to drive to school to pick up your children.

As part of your evacuation plan, determine how family members will communicate if they become separated. Each family member should have a list of telephone and cellular phone numbers and email addresses of everyone in the family and phone numbers of a few contacts outside of the family. This list should be readily accessible and not require power to access (e.g., not stored on a cell phone or computer).

Develop a Plan for Your Pets

Listen to local radio to determine if there are any pet friendly shelter locations near you. Pets entering such shelters should be caged and owners must provide food, bowls, bedding, waste disposal bags, leash, and medication for their pets. If possible, take your pet with you to high ground outside of the evacuation zone.

» Supplies and emergency checklists for pets

If needed, develop a plan to help those who cannot help themselves, such as the disabled or those with limited mobility. If people with special health needs are with a care provider, confirm that the care provider has an evacuation plan. Otherwise, you, your relatives, your friends, or a specified designee can take responsibility for that person. Confirm that neighbors in this category will be taken care of.

Your evacuation kit may include:

New Edition of the Homeowner's Handbook to Prepare for Coastal Hazards 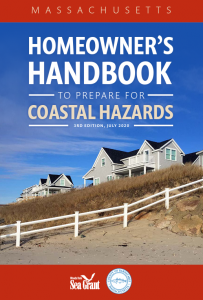 Now in its third edition, the handbook has a fresh design, references to recent storms, updated graphics, and the most current information, codes and links.

It also provides more information on climate change and  resiliency to help citizens, plan, prepare and mitigate the impacts of more extreme storms.

Want a copy of the Homeowner's Handbook to Prepare for Coastal Hazards?

Download a PDF of Homeowner's Handbook to Prepare for Coastal Hazards OR email seagrant@whoi.edu. Include your name, mailing address, and the number of handbooks you're requesting. Handbooks will be available in September 2020.

Hunting Hurricanes with a NOAA Pilot 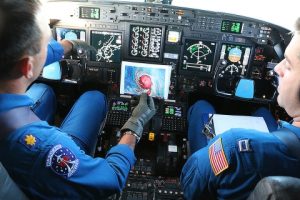 Getting Prepared for Hurricane Season 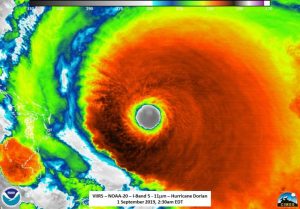 »  Hurricanes at Home! webinar series by the National Hurricane Center on the NHC YouTube channel.
»  NOAA Education Resources on Hurricanes - Tropical cyclones, hurricane safety, videos, satellite imagery, historical records, and much more!
»  Create-A-Cane - Try to create ideal conditions for a hurricane by changing the winds, latitudes, moisture and sea temperature.
»  Aim a Hurricane - How many different places can you make the hurricane strike simply by changing a few conditions?
»  National Hurricane Center  "Opportunities for K-12 students".