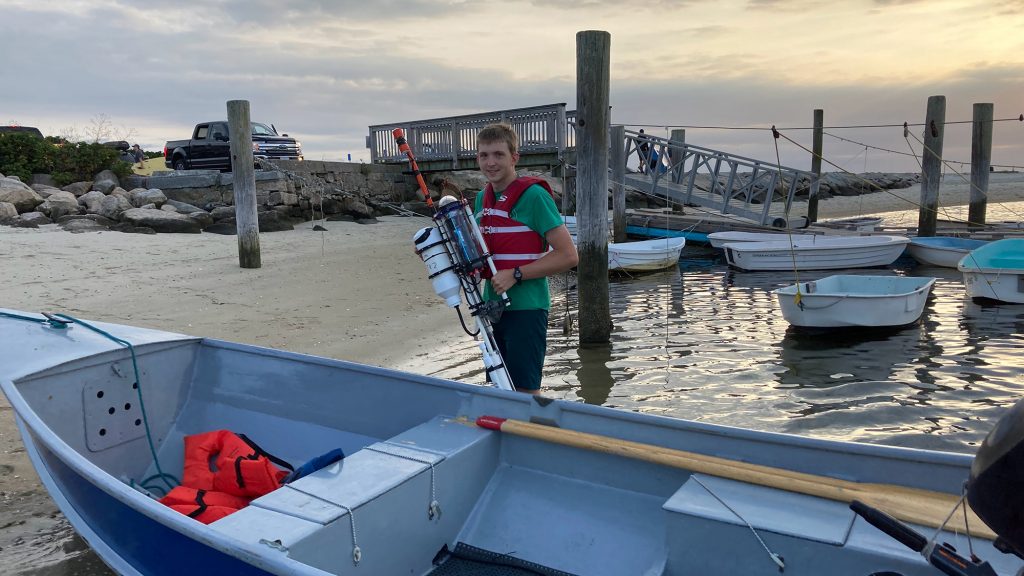 Over the past four years, Mike Jakuba, a senior engineer at WHOI, has worked with Brookline High School student Patrick McGuire to build the next generation coastal profiling platform, an inexpensive "virtual buoy" and a platform for other sensors. The project was funded through Woods Hole Sea Grant’s Program Development Fund and has since received additional support from WHOI. The system uses a low-cost, pump-less, semi-passive buoyancy engine that enables the virtual buoy to transition between drifting at the surface during favorable tides and anchoring on the seafloor. 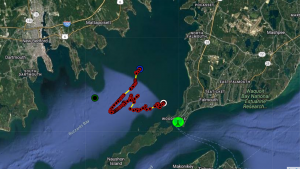 This image shows the track of  TideRider #2 as it made careful progress across Buzzards Bay (MA).

The project’s intention is to aid the public’s understanding of their local coastal ocean and foster a sense of stewardship via accessible and inexpensive observing technology.  Jakuba is working with Roo Nicholson and Anna Michel, also from WHOI, along with Grace Coughlin of Thayer Academy to integrate Nicholson and Michel's novel low-cost, low-power dissolved oxygen sensor that may ultimately allow TideRiders to augment existing professional water quality monitoring programs.​

"The seed money from Woods Hole Sea Grant produced some very nice results last year," Jakuba says, which his team leveraged into a grant from WHOI. That funding has been supporting Patrick, who is headed to Northeastern University this fall.

This summer, Jakuba has worked with Patrick on several week-long TideRider deployments in Buzzards Bay.  As of early August, there is one unit -- "TideRider2" -- in Buzzards Bay, which will be in and out of the water for the rest of the summer. You can track its progress at https://tide-rider.github.io/.  (Leave the "access key" field blank to view the data.  Other deployment tracks are accessible from the drop-down menu at the top.)

TideRider2's track validates simulation work performed early in the project that showed it was possible to drive a device to a waypoint by drifting in favorable tides, and anchoring otherwise.   More tests are needed to build confidence, but Patrick's worked has helped the project achieve a significant milestone.